Reviewing the Island of Paradise 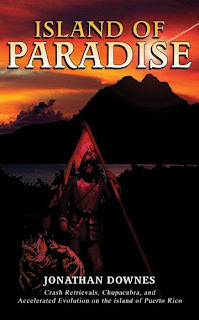 NOTE: This review was first published in the new issue of Stuart Miller's Alien Worlds magazine. Thanks to Stuart for letting me republish the review right here.

A Review by Nick Redfern

As someone who is themselves an author, I am often asked to write reviews of other people’s books. And so, when Alien Worlds’ editor, the good (most of the time, at least) Mr. Miller, asked me if I would be willing to review the latest mighty tome from British writer, crypto-zoologist, and director of the Devon-based Centre for Fortean Zoology, Jonathan Downes, I immediately said yes.

Reviewing Jon’s book, Island of Paradise – which is an on-the-road, warts-and-all, study of a week-long expedition to Puerto Rico in 2004 in search of the infamous Chupacabras – was somewhat of a departure for me; and I’ll tell you why.

The vast majority of all the books I review are focused upon the adventures and exploits of other people. Island of Paradise, however, is very different; in the sense that it’s a book in which I play a central role. Nevertheless, I hope this has not influenced my opinion of the book!

It was in the summer of 2004 that Jon and I headed off to the rain-forests of Puerto Rico, courtesy of the Sci-Fi Channel, who wanted to film us chasing the Chupacabras and UFOs for its now-defunct show Proof Positive – which was a pretty well executed combination of The X-Files meets CSI, albeit in a non-fiction format.

For seven days we rampaged and roamed around the island in search of the vampire-like beast, and heard tale after tale of crashed UFOs, dead aliens, bizarre conspiracies linking the Chupacabras with extra-terrestrial experimentation, secret military operations, black ‘Flying Triangles’, and much more. And, thanks to Jon, the whole story of that distinctly bizarre week is now finally chronicled in print.

The best way I can describe Island of Paradise is as a Fortean version of Hunter S. Thompson’s fabulous The Rum Diary that told of the master’s own journalistic adventures on Puerto Rico back in the 1950s.

Jon skilfully captures the essence of what makes Puerto Rico so magical, in terms of its history, its culture, its people - and its overwhelming weirdness, too. Truly, as Jon demonstrates, Puerto Rico is a locale that attracts the adventurer and the thrill-seeker like no other. And given that it was a veritable hot-bed of activity of the ufological, vampiric and downright uncanny kind, what else could I, or indeed we, do but welcome the aforementioned weirdness with wide-open arms.

If Jon and I were going to spend a week hunting vampires and/or aliens courtesy of the Sci-Fi Channel, then, as he reveals, there was no better place to do it than deep within the heart of the island of paradise, and while regularly fuelled by the finest of local cuisine and a plentiful supply of ever-present chilled margaritas and imported beer. Onward!

Having digested Jon’s book, I can safely say that one thing stands out more than any other: only an adventure involving the Centre for Fortean Zoology could result in a deep discussion of Fireball XL5, Earl Grey Tea, Guantanamo Bay, Chupacabras DNA, Roswell, and the United States’ ominous Department of Homeland Security!

I was pleased to see that Jon included in the pages of his book a description of our time spent at our base of operations: the Wind Chimes hotel in downtown San Juan. For those who weren’t there, it might seem superfluous; but for Jon and me it was a time to rekindle a friendship that had been separated by the Atlantic for a couple of years; and it was a time to make new friendships with the Sci-Fi Channel’s crew.

There is something unique about the camaraderie that comes with hanging out alongside fellow thrill-seekers and adventurers – all from different corners of the globe, most not even knowing each other, yet all thrust into a strange and surreal quest to seek out the truth about a diabolical beast said to roam a real-life paradise.

But, Jon demonstrates, it was without doubt the day we go our hands on a shining, silver jeep that things really took off…

There’s something special about driving around in an open-top jeep in a place like Puerto Rico with one of your best friends, with the wind in your hair (for those who have hair…), and in hot pursuit of the unknown, while ear-splitting punk rock reverberates out of the CD player.

Barely one hour into our expedition, as Jon records, everything got a bit surreal. No expedition of this type would be complete without an excursion into the darkened depths of a shadowy old cave. That a bat decided to piss on my head while we were in there only made things more memorable. With much humour, Jon records how I decided not to bother with rabies injections of a type that Ozzy Osbourne was forced to undergo after his own legendary encounter with a bat; and instead I hoped that the little pisser wasn’t rabid, and that I wouldn’t wake up the next day like one of the frenzied souls from 28 Days Later or the spectacular 2004 remake of Dawn of the Dead. Needless to say, I didn’t.

Of course, I knew that all of this would serve as good fodder for Jon’s planned book on our trip around the island, and so I merely wiped my head with my bandanna, swore at the offending beast and his or her brethren and continued roaming and filming. And a crew of a dozen, led by the good Mr. Downes himself, laughed heartily!

Perhaps of most interest to readers of this magazine is what Jon has to say about an alleged UFO crash deep in the El Yunque rain-forest of Puerto Rico back in 1957. Jon tells the reader of our fascinating encounter with a woman named Norka who was able to fill in some of the gaps suggesting that at least something had genuinely crashed on Puerto Rico back in the 1950s, and who was also a veritable fountain of knowledge on all-things monstrous too.

As long as I live, I will never forget that moment when Norka told us of her own personal encounter with the Chupacabras late one night in 1975, and Jon and I turned to each other and realised that the beast Norka had seen was practically identical to the notorious Owlman of England – a creature that Jon had hunted, and been haunted by, for years. It was truly a pivotal moment in that memorable week.

As we sat on the balcony of Norka’s beautiful home high in the hills of El Yunque, sipping cold drinks, listening to her stories, and with the sun bathing down on us, I knew that we were experiencing something very special, and that beneath its beautiful exterior, something – or some things - dark, ominous, dangerous and bizarre dwelled on the island. And Jon’s chapter on this particular encounter most certainly does not disappoint.

One of the things that stood out for me upon reading Island of Paradise was how the initial quest quickly became something very different – and particularly so when new, and unforeseen, factors came into play. We had flown to Puerto Rico with the intention of trying to determine, for the benefit of the Sci-Fi Channel, if we could find, examine and identify any evidence for the existence of the Chupacabras – such as undeniable DNA. Yet, by the end of the week we were deeply immersed in stories of crashed UFOs, genetic mutation, bizarre changes in the island’s ecology and much more.

I will never forget that week in the summer of 2004 when Jon and I roamed Puerto Rico’s rain-forest, its lowlands and its little villages in search of monsters, UFOs and aliens. It was an experience that will stay with me for all my life, and one that (as the book records) was as much about friendship, adventures and good times as it was about hunting for the Chupacabras and for the remains of wrecked alien spacecraft. And at the end of the day, that was good enough for me.

As for Jon: well, Island of Paradise tells it all, just as it was – the good, the bad and the plain strange.

If you’re looking for the definitive book on the Chupacabras, its potential links with the UFO controversy in general (and crashed UFOs in particular), and what goes on behind the scenes of an on-site, week-long investigation in an exotic and mysterious world, then Island of Paradise is most definitely the one for you.
Posted by Nick Redfern at 4:30 PM

...Now that I have read this review,Im going to be buying the book. At the end of the review,I was still wanting it to go on! That's a surefire sign the book is going to be a hell of a good ride.

Secondly,the comedian in me will never allow you to live the bat piss incident down. : )

All my best to both you and Jonathan. Whenever I read about your adventures(and MISadventures too),I realize that life itself is an adventure and is worth living every moment to its fullest!
Cheers!
-Raven

Thanks Raven!
The bat thing was something I will not forget LOL.
Yep, that's right: life is to be lived!