There's Something in the Bedroom... 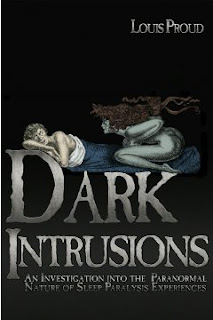 In the References section of my book, There's Something in the Woods, I briefly noted that: "In the early hours one morning in late 2002, I had a nightmarish encounter with a wolf-like, cloaked figure that manifested in our apartment while I was in the depths of a sleep-paralysis-style slumber. It took all my strength to wake up, at which point the foul beast vanished into the darkness."

Collectively, I think, I've had maybe 2 other experiences of a similar nature: one (around 2003) involving a cloudy, shadowy figure leaning over me and preventing me from rising from the bed, and the other of a presence (that I interpreted as malevolent) slowly climbing the staircase at one of my old abodes in England. I struggled to wake-up, knowing full well that its destination was my bedroom (and which occurred at some point in the early-to-mid 1990s).

As a result, I've always taken a keen interest in reports such as these - hence the review that follows!

A lot of words have been written about the strange and unnerving phenomenon (or, perhaps, phenomena would be a better and more accurate word to use) that has popularly become know as Sleep-Paralysis (SP).

Some of those words have been good and some of them have been bad. Others have been wholly skeptical; while many have been firmly pro-SP.

But, what has been lacking until now is a truly in-depth, book-length and definitive study of the mystery written by someone who has actually experienced repeated episodes of sleep-paralysis, first-hand - and in all their terrifying glory, no less.

That situation has now changed (and radically so, too), thanks to Australian author Louis Proud, whose title (just published by Anomalist Books) Dark Intrusions: An Investigation into the Paranormal Nature of Sleep Paralysis Experiences, makes for both remarkable and essential reading.

One might argue that anyone with an above-average knowledge of the paranormal and a keen writing talent could sit down and deeply research the subject of sleep-paralysis and then, as a result, write a paper, a report or a book on the subject.

Well, maybe that's possibly true. But what would be utterly lacking would be the sheer, intense and harrowing personal touch that Proud skilfully brings to his book time and time again.

It's clear to me, at least, that the writing of Dark Intrusions was very much a cathartic experience for the author. And that's a good thing, taking into consideration some of the nightmarish events that he chronicles within the pages of his book - and with refreshing openness and clarity, no less. Indeed, Proud is not at all afraid to dig into his personal life, experiences, beliefs and ideas pertaining to the world of the paranormal as he searches for the answers relative to SP.

And, I suspect, possibly as a result of the fact that he has - in his 25-years - experienced numerous SP episodes, Proud displays the zeal, drive, inquiring-mind and enthusiasm that are needed when addressing such an emotive topic.

So, as a result of not just wanting to get an answer to what lies at the heart of SP, but also to understand, appreciate and reconcile how the mystery impacts upon his own life, Proud brings to the table a vast array of data that is thought-provoking, unsettling, creepy, ominous and...well, you get the idea!

Thankfully, Proud does not fall foul of the mistake that many authors make when writing about such anomalous phenomena: namely, simply reeling off case-after-case in mind-numbing and yawn-inducing fashion. Rather, he also provides the reader with a variety of theories to explain what may well be afoot with respect to SP, and what its relationship to us may be.

It must be said that there is much in the pages of Dark Intrusions that readers of a nervous disposition (or those who have experienced SP) may find unnerving. But for those of you who may be of that particular mind-set, I would say do not avoid Proud's book. In fact, I would actually urge you to digest its pages very carefully: you may very well come away from it profoundly changed and informed - and in a positive fashion, too.

But, that doesn't take away the ominous nature of SP: "Defiled" and "Unclean" are just two of the words that Proud uses to describe at least some of his SP experiences, a number of which have been very sexual in nature.

And, they are highly appropriate words, too - and not just in Proud's case, either. "You knew that I would come" are the bone-chilling words that one victim of SP reportedly heard uttered by an icy, female intruder from the outer-edge.

So, who - or what - are these uninvited guests who have, for countless generations, tormented probably millions of people all around the world in the middle of the night? From where do they come? What is their motivation? Can they be stopped?

These (and many more) questions are carefully addressed by Proud as he takes us on a wild-ride that includes such matters as: the Old-Hag controversy; Incubus and Succubus encounters; poltergeist activity (such as that relative to the famous Enfield Poltergeist saga of 1977); out-of-body experiences; Buddhist teachings and beliefs; the nature of the human-soul; the afterlife; altered states of mind and body; and much more.

Certainly, for me at least, one of the most fascinating aspects of Dark Intrusions was the material that focuses upon Alien-Abductions. If you read this chapter, and come away still thinking that AA's are merely the result of genetic experimentation undertaken by bug-eyed scientists from Alpha-Centauri, then there's absolutely no hope for you.

Proud demonstrates (and in a way that a number of AA researchers and writers are now beginning to suspect and understand) that the AA puzzle is one that also has major bearings upon questions relative to the after-life and the human life-force - and, of course, SP.

Those acquainted (or even unacquainted) with the studies of Dion Fortune, Stan Gooch and Trevor James Constable will find much of an enthralling and captivating nature, too.

But, for absolute downright creepiness, there is the story of the late Joe Fisher, author of The Siren Call of Hungry Ghosts, which is as cautionary as it is mind-bending.

Equally fascinating is the story of how Proud himself deliberately tried to place himself into SP mode - with startling and notable results.

In other words, this is a truly excellent and wide study of a phenomenon undertaken by a man who has not only been touched and changed by SP himself, but who has had the courage to seek out the answers to this mystery, and who ultimately triumphs, rather than merely playing the role of victim to the menacing entities that invade our slumber.

As Proud states: "...the SP state puts you in direct contact with your soul."
Posted by Nick Redfern at 9:43 AM

Haven't read the book yet, though I think I must at some point.

I have had experiences of sleep paralysis over many years. Though they seem to have eased off lately.

'They are seeking redemption'

Then it occurred to me that I have had a couple of experiences where I have managed to 'face' the phenomenon..to look at it directly with an attitude of challenge and something odd has happened.

In one I awoke, on my back, paralysed with the sense of a dreadful presence in the room. It was slowly climbing up from the foot of the bed..I had the impression of claws on the top of the quilt as it pulled itself up. I was terrified.

I decided to muster all my energy and face it head on....in a kind of challenging, you ain't gonna scare me, kind of way. As it appeared over the edge of the quilt and I was looking directly at it, it transformed into a tiny kitten.

Are these 'real', are they shadow aspects of myself, or some kind of outside intrusion, looking for acceptance and reconciliation? Whatever, whoever,perhaps they are actually seeking redemption?

“...perhaps all the dragons of our lives are princesses who are only waiting to see us once beautiful and brave. Perhaps everything terrible is in its deepest being something helpless that wants help from us.' (Rainer Maria Rike)

Many thanks for this. I know the author of the book, Louis, read the review here, so hopefully he will get to see your comment too.