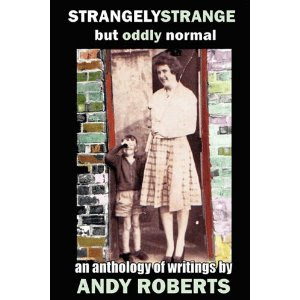 Back in 2001, Paraview Books published a title called Swamp Gas Times - a collection of articles spanning the decades and a variety of Fortean subjects; but all penned by Patrick Huyghe, now of Anomalist Books. In other words, SGT was a good, solid anthology of Patrick's writing for - amongst others - Saga UFO Report; the New York Times Magazine; Omni; Space.com; and Science Digest.

At the time, I thought: what a great idea! Presenting, under one cover, the collective, feature-based work (and, in some cases, the now-hard-to-find work) of a well-known author in the fields of Ufology, Cryptozoology and more would surely become a trend. But, oddly, it didn't. At least, not back in 2001.

Nevertheless, Patrick's book still stands today as a great example of how just such a title should be presented (it was recently re-published by Anomalist Books). And someone else who recognized this is Jon Downes, my good mate at the Center for Fortean Zoology in Devonshire, England.

Indeed, Jon has now taken the bull by the horns, and has launched an ambitious project to publish anthologies of the work of a whole range of writers within the Fortean world (myself included); something that - as with Patrick's book - will allow readers to see a great deal of the early and obscure writings of the author in question; as well as some of their latter-day output, too.

And, the first volume - I am very pleased to say - is now available: Strangely Strange But Oddly Normal: An Anthology of Writings by Andy Roberts.

I first came across the startling phenomenon known as Andy in the 1980s, when Graham Birdsall's UFO Magazine was still a photocopied fanzine-type publication called Quest, when the CFZ was still a dream to Jon Downes, and when the Fortean scene was very different to that of today.

My first exposure to Andy's writing came in 1987 when, while working in Harlow, Essex, I found a used copy of Andy's Cat Flaps (a study of Britain's "Big-Cat" mystery) in a second-hand book-shop, and which I remember reading late one night in my tiny, cramped room, while the infamous hurricane of October of that year buffeted just about everything around me.

Next, for me at least, was Andy's UFO Brigantia: a witty, informative and entertaining mag that Andy published nigh-on twenty years ago and that probably brought him just about as many friends as enemies. But, hell, Andy didn't care. And rightly so.

Anyway, rather than waffle on any longer about the halcyon days of British Forteana, I'll get to Strangely Strange.

Or, rather, first I'll get to the truly shocking cover of the book; which displays what I can only describe as "The Three Stages Of Andy." The front-cover is a photo of the author and his mum, stood on their doorstep, and which shows, I would estimate, a 4-year-old Andy beaming widely. How could a life in Forteana have so warped such a cherub? Future-mystery-seekers: you have been warned!

As for the back-cover, first we see "Stage 2" Andy, looking eerily like Alan Davies' portrayal of Jonathan Creek, in the BBC TV show of the same name. And then it's on to the present-day, where Andy, with white-whiskers, gray-white bandana pulled down tightly on his head and eyes squinting in the sun, rather resembles a baby-seal, just about to get clobbered on the head by some callous Canadian. But, I digress: onto the book!

Strangely begins with a fascinating Introduction from Andy that details how he came to enter the realm of weird shit, and then propels us firmly into the man's world, his writings, beliefs and life. And, a wild, fun, informative and witty intro it is, too.

The good thing about SS, is that it doesn't just focus on one topic, but delves into everything from the LSD culture to Foo Fighters; from the Big Gray Man of Ben Macdhui to animal-mutilations; from the writings of English fantasy author Alan Garner to the works of John Keel - and much more, too. And that's what makes Strangely Strange not just an average anthology, but a very good one: there's a rich variety of articles and papers negotiating decades and topics.

As someone who, as a kid, was fascinated by the literary output of Alan Garner, I was pleased to see that Andy too has a deep appreciation of the man and his classic Thursbitch title. And in Thursbitch - Valley of the Demon? Andy's deep knowledge and appreciation of Garner's work is evident. And, if you aren't acquainted with Garner's books, Andy's dissection is a fine place to start.

We're also treated to the somewhat embarrassing, yet highly-entertaining and instructive piece on the so-called "Cracoe UFO," which was actually nothing of the sort!

"Cracoe" was one of those blots on the ufological landscape that captured the imaginations of some of the north of England's leading players on the scene many-a-moon ago, but that ultimately - albeit not literally - came crashing to the ground. Indeed, it's a cautionary tale that reveals much about belief-systems, perception and misperception, and much more, too. They don't make 'em like that anymore!

The paper on Scotland's Big Gray Man and associated "mountain-panics" is a scholarly one that should be required reading for anyone and everyone interested in the legend of what many interpret - quite wrongly - as a "British Bigfoot." Again, Andy demonstrates how, as with the Cracoe fiasco, the human mind may play an integral role in the Ben Macdhui affair.

Anyone who knows Andy will be aware that one of his great passions is music (or, at least, what passes for music in the Roberts household - he knows I'm joking!), and this shines throughout the pages of the book; particularly in that material which focuses on Andy's very open comments and observations on the LSD culture of the early 1970s, and his exposure to the music of such bands as Pink Floyd and The Incredible String Band. Indeed, the ISB feature heavily in the book, and it's clear from Andy's careful dissection of their work that they had a profound effect on his life, his philosophy to life and much more.

We also get to see much of Andy's early research into the Foo Fighter phenomenon; a fine interview with John Keel (which originally appeared in UFO Brigantia back in 1992); a lengthy report on the notorious "Berwyn Mountain UFO Crash" of 1974, with which so many (myself included!) within 1990s Forteana became obsessed; and an interview with Andy undertaken by Stuart Miller, in which - again - we get to learn much about the inner-thoughts of Andy in relation to the world around him, and realms beyond.

And, it wouldn't be an Andy Roberts anthology without the inclusion of a piece from the man's The Armchair Ufologist. When British Ufology was running at full-throttle in the mid-to-late 1990s, and when the newsstands were crammed with all manner of UFO monthlies (Sightings, UFO Reality, Alien Encounters, etc - now all long-gone to that big Hangar 18 in the sky), Andy decided to get in on the act, too. Thus was born The Armchair Ufologist.

Tragically, what was without doubt the most entertaining UFO rag of that decade had a very short lifespan. But, it will certainly be remembered by all that read it and who appeared in it. Some of us - like me, Jon Downes, and Irene Bott (of the Staffordshire UFO Group) - rolled around the floor with laughter while reading it (albeit not all at the same time, I should stress...Well, not always...). Others, meanwhile, fumed, raged and ranted about how Dark Lord Roberts was bringing Ufology into complete and utter disrepute.

TAU was, essentially, a gossip-style newsletter that focused on who in Ufology was doing what to who else in Ufology; on the alcolol intake at post-gig, ufological parties; and much more of an entertaining and scandalous nature.

And, in Strangely Strange, we get treated to what was (in my view) without doubt the ultimate highlight of TAU: namely, Andy's review of a notorious party that followed the annual LAPIS gig in Lytham St. Anne's in 1999. This is a priceless piece that - if you weren't there in-person - deserves to be read by one and all. You'll never look at Ufology the same way again!

So, all in all, what do we have with Strangely Strange? Well, we have an excellent collection that covers Andy's writings from 1974 to the present day, that treats us to a wide-range of topics, that informs us and entertains us, that reveals to us what it is that makes Andy tick, and the nature of the beast known as Fortean freelance-writing.

This is an excellent first-volume in what is destined to become a great series. Congrats to all involved.

If you're in the UK, you can purchase Andy Roberts' Strangely Strange But Oddly Normal by clicking on this link; and if you're in the US, click right here.
Posted by Nick Redfern at 5:00 AM

You were an Alan Garner fan too?

Not just truly my hero but my twin brother in a previous life, (though admittedly I would've been the short beautiful one: you'd've been the tall evil one Gran'ma was always trying to kill!).

You see? Norfokkerunia isn't really a place: it's a state of mind, of being - it's where I come from, too!

Now I know you're an Alan 'Weirdstone of Brinsingamen' Garner man, too, I can finally forgive you hogging the milk to yourself and palmin' me off with the orange juice.