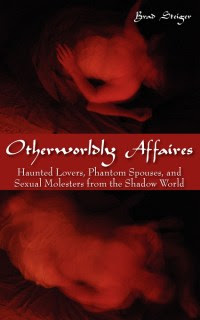 As someone who is basically agnostic on the issue of life-after-death (but also as a person whose views sometimes veer towards general acceptance of the idea, and sometimes towards the theory that physical death is, quite literally, the end) I'm always cautious about reading books on the afterlife.

And particularly so when it involves the denizens of the spirit world coming back to visit us, and for one prime reason: generally the author (whether they are a firm believer or a hardened skeptic) has a viewpoint that he, she or they are trying to make us accept as the definitive truth.
I have, however, had a couple of genuinely odd experiences myself that may be indicative of an afterlife (one, ironically, involving not a person; but our pet dog who died in 2003). So, for the reason cited above, it's with a slightly wary mind - yet, I must stress, always an interested mind - that I approach such books.
Fortunately, there's no need to have such concerns about Brad Steiger's new title, Otherworldly Affaires - originally published in 1971 as Haunted Lovers, and which is as relevant and as vital today as it was nearly forty years ago.
Steiger's book is, as you might have already deduced from its title, a study of such issues as (A) lovers who returned from the grave; (B) ghostly wives and husbands who came back to warn their loved-ones about their future relationships - sometimes out of concern about the people they were getting involved with, and other times out of near-homicidal jealousy; (C) those whose lives were tragically cut short (such as military men on the battlefield) and who returned to say a final goodbye to their partners; and (D) much more, including stories that range from the uplifting and the thought-provoking, to the downright sinister, malevolent and utterly crazed.
Yes, it seems that if the afterlife is a reality, then at least some of the many and varied character traits and emotions that dominate relationships, marriages and affairs in this world continue on into the next.
Or do they?
To his credit, Steiger does not force any particular scenario upon his readers. For example, he gives much intriguing space to the idea that perhaps many encounters with deceased loved-ones might not actually provide evidence of life-after-death.
Rather, he reveals, there is a possibility that at the moment of death it may be possible for a person to transmit a final, loving message - and one that perhaps even results in a spectral manifestation of the person in question - to their spouse or partner, before death takes them forever.
Steiger also discusses the possibility that perhaps it is within the confines of the mind of the surviving partner that the game really begins. By that, I mean he offers the idea that maybe - overcome by grief and intense emotion - the person left behind is so devastated by the passing of their loved one that they create an image in their mind of their husband, wife, girlfriend or boyfriend.
He goes a step further, however, and muses upon the idea that perhaps this same image can be unconsciously externalized and seen. Of course, the person has no idea that they are actually viewing something they may have unwittingly created.
The important factor that Steiger notes, however, is that visions such as these (whether created by the human mind or the result of an actual return from the grave) generally provide a great deal of comfort to those left behind to pick up the shattered pieces.
And in a field that often portrays the after-life as one of purely love and light, Steiger does not omit those accounts and reports demonstrating that sometimes deceased lovers might not have our best interests at heart, and that occasionally display symptoms of violent poltergeist-like activity.
So, having now firmly digested Brad Steiger's Otherworldly Affaires, where do I stand?
Well, I'll tell you: as was the case before I read the book, I remain firmly convinced that something significant occurs at the moment of death; and that - at times - that same something of significance can continue to manifest itself in the weeks and months that follow a passing - whether it's a human-being or, in the case of me and my wife, a loving, devoted dog.
But, I'm just not sure whether the experiences are external or internal.
I can, however, say that whatever your views on the idea of an afterlife, Otherworldly Affaires is a book that will provide a great deal of food for thought for anyone who wonders about what, if anything, awaits us when we die; and if we can come back and be with those we love.
And for presenting, without prejudice, a varied and fascinating range of theories to account for the stories that he relates, Steiger is to be applauded. Unbiased, informative, and definitely fascinating!
Posted by Nick Redfern at 2:52 PM No comments:

Fort - Back in Print 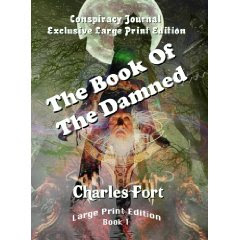 Here's what Tim has to say about the books: "I first purchased a copy of one of Charles Fort's books when I was about 13 years old. It was perhaps my first inkling that there were others who were interested in probing that which remains just on the other side of the unknown. I'm very proud to be able to present Fort's works in a large print, large format edition, as I believe this will open up his works to a whole new audience."
And as Tim also notes:
"Charles Fort was a collector of strange tales which he gleamed from dusty newspapers and out of print scientific journals. He spent over 20 years in public libraries in the UK and later in America where he combed the shelves of the NY Public Library in search of the strange and unknown. This resulted in 4 works of approximately 1,000 pages pertaining to the most unusual subjects you are likely to read about anywhere in any era. . .and the stories are well researched and documented.
"Fort's works have long been sought after and were finally made available long after his death. We are proud to be able to present the following four volumes in never before presented large print editions. The books in this set are: 1. WILD TALENTS -- 2. BOOK OF THE DAMNED -- 3. NEW LANDS. 4. LO!
"In a breezy easy to read style Fort presents hundreds of episodic tales from the borderland of human understanding such as. . . Strange Disappearances. . . The Man Who Couldn't Drown. . . Mysterious Cattle Rippers. . . Blonde Beast of Patagonia. . . Human Vampires. . . Lake and River Creatures. . . Bizarre Slayer of Sheep. . . Spontaneous Human Combustion. . . Mirages of Cities and Towns. . . Phantom Figures. . .THe Original Cat Burgler. . . Original UFOs and Airships. . . Submarine Objects. . . Possible UFOnauts. . . Fossils in Meteorites. . . AND MUCH MORE."
Here's the link to purchase the new editions.
I strongly recommend all four books if you haven't got them already. And as Tim correctly notes, all of Fort's titles are packed with tales of all-things mysterious.
Posted by Nick Redfern at 11:23 AM No comments: