The Silver Bridge: A Review

As promised, here's my review of the newly-republished edition of Gray Barker's classic book on Mothman: The Silver Bridge.
Posted by Nick Redfern at 11:16 AM No comments: 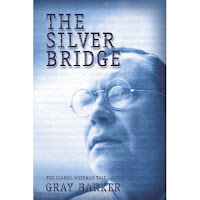 I mentioned here last week that Gray Barker's book on the Mothman puzzle - The Silver Bridge - has just been re-published; but that it wasn't yet on Amazon. Well, the good news is that Amazon now have it, and here's the link. Finally, you can get this much-sought-after title without having to spend (literally) a couple of hundred dollars! For those unacquainted with Barker's book, I'll be doing a new review of it here next week.
Posted by Nick Redfern at 9:17 AM No comments:

Barker, The Beast, The Book

Gray Barker's own, unique take on what is arguably that most mysterious of all crypto-creatures - the Mothman - is now back in print.

Yep, his classic title, The Silver Bridge (the original of which regularly goes for a whopping $150.00 and above online) has just been re-printed.

My review-copy arrived yesterday; however, Andy Colvin - the author of The Mothman's Photographer trilogy of books and the driving force behind the new edition - tells me it won’t be available on Amazon until later this week or possibly next.

It's been at least 15 years since I last read Barker's book; and so rather than review it here from memory, I'm going to re-read it and then write my review.

I'll let you know when I get an update about its online availability. Until then, here's what the back-cover blurb says about Barker's book:

What kind of book is The Silver Bridge? Well, it is primarily not about the collapse of the “Silver Bridge” in Pt. Pleasant, West Virginia, which killed almost 50 people back in 1967 - though it does describe the strange events that preceded the collapse.

Is it about “Mothman,” the hypnotic bird-man who terrified the Ohio and Kanawha Valleys in 1966 and later became as famous as Bigfoot and the Loch Ness Monster. Or…Is it a dramatic, emotional docudrama, such as when we hear the sobbing of a sad child, calling for his dog after the unfortunate animal has been mysteriously snatched out of this world?

And what about Woody Derenberger, wondering whether he should tell his neighbors about the otherworldly “Indrid Cold,” who stopped his van on Interstate 77 for a mind-shattering “interplanetary” interview? It can’t be science fiction, because these events actually occurred, as a search through the newspaper files of this time will prove.

One suspects that Barker has in fact written something completely different. It’s a new genre of sorts, about a creature that, ironically, may be very old. Ancient lore tells us that flying avatars similar to the Mothman, such as the Garuda, Thunderbird, and Piasa, have been around a long time.

The Silver Bridge is multi-layered and will likely be interpreted differently by each reader. Some will rave of its “deep psychological content,” others its “social commentary.” Many will be content to sit back and simply enjoy this hair-raising narrative - though it might well creep nightmarishly back into their minds late at night, like the barely audible chanting of robed figures in the foggy, moonlit woods. Regardless of what The Silver Bridge really is, one thing is certain: it will haunt you forever…

This 2008 edition features new introductions by ufology legends Alan Greenfield and Jim Moseley, as well as a foreword by paranormal researcher Andy Colvin, aka “The Mothman’s Photographer,” whose book trilogy of the same name renewed interest in the MIB conspiracies discovered by Barker. ISBN: 978-1-4392-0427-6
Posted by Nick Redfern at 6:51 AM No comments: