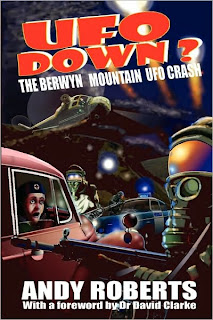 Back in the halcyon days of approximately 1996-1999 - when UFOs were all-dominating on the British newsstands, and when Mulder and Scully were the Posh 'n' Becks of the day - much page space was devoted to a strange, previously all-but-forgotten, and genuinely intriguing event that had occurred on a Welsh mountain one dark, winter night in January 1974.

For many people of a "The Truth Is Out There" persuasion (in the 1990s, at least), this curious affair was seen as being nothing less than a potential "British Roswell" - or a "Welsh Roswell" would be far more accurate.

In other words, stories, rumors, tales and a degree of whistle blower testimony collectively suggested that perhaps nothing less than an honest-to-goodness alien spacecraft (complete with crew, no less) had crashed on North Wales' Berwyns Mountains range, and had been retrieved undercover of the utmost secrecy by elements of the British military and government.

And, I have to admit, that at the time in question ('96-'99) I was a fully paid up member of the "I Want To Believe" club, and I gave space to the incident in my books A Covert Agenda and Cosmic Crashes - and I was most certainly not against the idea that E.T. might have really crashed and burned on the Berwyns all those years ago.

However, it was as the '90s breathed their last, that Andy Roberts (to some - including me - a genuine Fortean sleuth, to others a spoiler of ufological fun, and to more than a few, a tool of disinformation agents in the government...YAWN) came along with a preliminary paper suggesting that the Berwyn affair was nothing more than the result of misperception, coupled with a localized earthquake and a meteor shower - on the same night and in approximately the same time-frame.

Of course, the true-believers moaned that Andy was following some nefarious agenda, courtesy of the Men in Black - the dreaded "them," in other words. And, those of a different persuasion gave Andy a collective pat on the back. But, still the Berwyn controversy continued to rumble and reverberate, before sliding back into a degree of obscurity that would occasionally be fodder for TV and radio.

But, today, as we get close to 2011, and with the aforementioned 1990s long-gone, Andy is once again tackling all-things of a Berwyn Mountains nature with his new book - UFO Down? - from the Center for Fortean Zoology's publishing company, Fortean Words.

And, I have to say, that - given the fact that UFO Down? represents the first full-length book on the case - Andy has done an excellent job of finally digging deep into the many and varied complexities of the affair and coming to a satisfying conclusion, which - interestingly - actually leaves the door open to one or two potentially Fortean anomalies having played some sort of presently-unclear role in the case.

But, with that said, this is an excellent study of how and why myths, legends, rumors, friend-of-a-friend tales, unbridled gossip, and good old misperception all played roles in carefully creating, nurturing and molding an admittedly fascinating series of separate events into the tale of a crashed spacecraft from a far-away world.

Easily worthy of a case for Holmes and Watson (and, particularly so given its ingredients of a dark, imposing and windswept mountain-range; little isolated villages; "phantom helicopters" prowling the moonlit skies; claims of deep and dark secrets; and shadowy and sinister Men in Black-like figures said to be roaming the landscape by day and night), the Berwyn story is one that is truly as fascinating as it is one filled with wild twists and turns. All that's missing is a ghostly black hound with glowing red eyes!

Packed with accounts of strange lights on the mountain, an alleged heavy British Army presence, alien bodies recovered at the "crash" site, meteorites, earth tremors, ghost-lights, official files and more, this is a book that anyone and everyone interested in UFOs (and particularly tales of crashed UFOs) should acquire a copy of at the earliest opportunity.

UFO Down? demonstrates how an investigation of such an event should be undertaken, even if the conclusions aren't what some solely belief-driven souls wish to hear. Well, too bad. Andy went to the places, spoke to the witnesses, chased down the government files, and travelled to where the evidence led him. And, if and when someone else decides to do likewise and comes to a different conclusion, then we'll take a look at that evidence in its own right, if and when it surfaces.

But, right now, we have in my opinion a first-class, true-life detective-style story that tells the truth of the Berwyn affair (or, as close to the truth as we're likely to get) and reveals its complexities to the extent that we're able to.

And, to his credit, and as I alluded to earlier in this review, Andy's conclusions don't rule out the possibility of something weird having occurred (in one, specific aspect of the story), in some odd fashion, at least.

The field of book-writing and crashed UFOs is filled with tales of Hangar 18, alien bodies on ice, and extraterrestrial autopsies. UFO Down? is a very different addition to the field of crashed UFO titles, but in a refreshing, welcome and - most important of all - informative and illuminating fashion.

Whatever your views on all things saucer-shaped and crashed, you should buy this book. You will learn a lot - about those aforementioned crashed UFOs, but also about why and how the British UFO research community of the 1990s arguably needed its very own Roswell, and how and why belief systems and eyewitness perception may be the most important facets of certain, challenging, alleged UFO events.

UFO Down? The Berwyn Mountain UFO Crash by Andy "Sinister Tool of the Secret Government" Roberts is published by Fortean Words. It's available at Amazon UK; Amazon USA; and Amazon Canada, and, of course, at all good book-selling outlets.
Posted by Nick Redfern at 1:49 PM No comments: 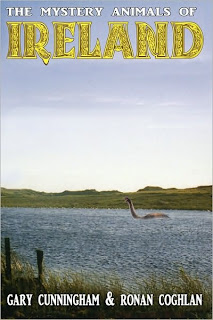 A couple of years ago, my good mate, Jon Downes (ye olde Director of the Center for Fortean Zoology) launched an ambitious new project - namely to commission, edit and publish a series of books that would chronicle the many and varied strange creatures of the British Isles.

Well, I'm pleased to say that there is now a brand new edition to the growing Mystery Animals of... series. This one isn't strictly a county-based book, however, as it covers the whole of Ireland and comes to us courtesy of cryptozoologist Gary Cunningham and surely the funniest (in every sense of the word!) man in Forteana, Ronan Coghlan, who my wife, Dana, refers to as a "lovable hoot"!

I read this book in two sittings, late at night and into the early hours, and while sprawled out on the settee, and I can say for certain that this is an absolutely excellent addition to this on-going series of titles.

What Gary and Coggers have done, is to finally, definitively, and once and for all, offer the reader a comprehensive, in-depth, and very well-written study of the many and varied mystery animals of Ireland that cover centuries-past to the present day.

And a fantastic and weird bunch of creatures they are too! We are treated first to an absolutely excellent study of Ireland's lake-monster sightings and reports - and it's a study that leaves me in no doubt (and, in all likelihood, it will leave you in no doubt either) that these strange and elusive beasts - whatever they may ultimately prove to be - are utterly real, albeit frustratingly elusive.

Whether they are some form of unknown and unclassified entities, giant eels, or something else entirely, Gary and the Cogmeister demonstrate that Ireland has been, and arguably still is, saturated with such beasts.

Graphic reports of close encounters (and, in some cases, very close encounters) with such animals abound in the 168-pages of the book, and the authors also provide us with some little-known and brand-new tales of the lake-monster variety. Truly, for this comprehensive data alone, Mystery Animals of the British Isles: Ireland makes for indispensable reading. And, on a similar issue, you'll also find much to ponder on with respect to Ireland's sea-serpents, as well as tales, legends and folklore of a definitive mermaid variety.

Moving on from the creatures of the deep, we get to learn a great deal about a seldom-covered topic: werewolves and other Irish shape-shifters. This is a brief, but very informative, chapter that tells us much about the rich folklore of Ireland and its attendant belief-systems, and is required reading for devotees of all-things of a werewolf nature.

And if ancient tales of Bigfoot and wild men are your personal cup of tea, well, you will be very pleased, since both are profiled in a section of the book that will fascinate all Bigfoot researchers who wish to have an understanding of the state of play outside of the usual "mystery ape" locales of North America, Tibet, and China.

Of course, mysterious and out-of-place large and exotic cats put in a welcome and significant appearance, as does the Irish wildcat. And: did you know that Ireland may once have been home to a colony of "dwarf wolves"? Well, you do now, and there's no excuse for not finding out all about them, courtesy of our fearless authors.

And, there are sections on animals that seem to be far more paranormal and supernatural in nature than they do flesh-and-blood - a topic that many cryptozoologists shy away from, but that our authors, to their credit, astutely realize are an integral part of monster-hunting.

Finally, no book on the mysterious creatures of Ireland would be complete without a comprehensive study of the Dobharchu or "Master Otter" - a Goliath-sized otter rumored to roam the wilds of Ireland. And, I'm pleased to say, the authors do the fascinating story much credit, and reveal thought-provoking cases, as well as theories relative to the identity and origins of this legendary critter.

With Christmas looming, you should treat yourself (and your friends and family too) to a copy of this new title from Gary and his Royal Cogness, and acquaint yourselves with an excellent study of the animal-anomalies of Ireland.

Mystery Animals of the British Isles: Ireland by Gary Cunningham & Ronan Coghlan is published by CFZ Press. To purchase the book, click here if you are in the UK; right here for Canada; and, here's the link for the USA.
Posted by Nick Redfern at 12:14 PM No comments: