One for Halloween: at my regular Lair of the Beasts column at Mania.com, I have just reviewed Vol's 1 and 2 of Brad Steiger's latest release: Real Nightmares, an e-book-based series that, as well as covering all things ghostly and paranormal, will be of deep interest to fans of cryptozoology.

Werewolves, Bigfoot, weird snakes and more - they're all in here!

And here's the link to the review.
Posted by Nick Redfern at 6:57 AM No comments:

Empire of the Wheel 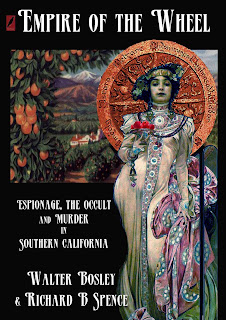 If you're looking to immerse yourself in a non-fiction tale of dark, conspiratorial, Gothic and truly unsettling proportions, you can now stop looking.

Empire of the Wheel: Espionage, the Occult, and Murder in Southern California is the one for you!

Penned by Walter Bosley and Richard B. Spence, Empire of the Wheel can best be described as a swirling and sinister combination of (A) an early 20th Century Mullholland Falls; (B) the occult and ritualistic aspects of the "Zodiac Killer" murders; (C) a wild Sherlock Holmes story; (D) shadowy and lethal espionage agents; (E) centuries-old black rituals; and (F) a great deal more too.

Basically, Empire of the Wheel is a packed, near-300-page title that tells the uncanny and macabre (and certainly little-known) story of a series of deaths - of men, women and children - that hit the San Bernardino area of California in the early-to-mid 1910s.

But what, at first, seems to be evidence of tragic suicide and accidental death - although certainly not without a few odd and attendant puzzles attached - becomes something much more ominous. In fact, outright malignant foulness would be a far better term to use.

Indeed, as the pages turn, so the body-count increases.

There's the mysterious and unknown woman who throws herself (or was she thrown?) into the lake at Urbita Springs Park.

There are the kids dropping like flies - maybe at the hands of some deranged, master purveyor of poisons.

And I cannot omit mention of the enigmatic character found dead - in a kneeling position, with one hand covering his mouth, and with a Freemasonry pin attached to the lapel of his suit, no less - amid a pleasant bunch of walnut trees in San Bernardino Valley's Little Mountain.

All the while, trying to make some degree of sense out of this escalating mayhem - and ultimately out of much more growing weirdness and death, too - is Chief of Police, Walter Alexander Shay.

In other words, all the ingredients for a fine, captivating and mesmerizing real-life detective story...but one that soon turns into something very different.

Indeed, as the book progresses, thrown into the tumultuous mix are German, American, and British espionage agents, the forever-enigmatic and controversial Aleister Crowley, ritual slaughter according to ancient teachings, ley-lines, earth-energies, the groundbreaking work of Nikola Tesla, the ancient goddess Hekate, and even Harry Houdini!

In fact, possibly the only things missing are the words, "It was a dark and stormy night!"

What we have here, then, with Empire of the Wheel, is a tale of power-wielding characters of a truly ominous nature, the dark activities of shadowy figures following the controversial beliefs and traditions of times long-gone, cold-hearted ritualistic slaughter for reasons diabolical, and the San Bernardino Valley transformed into the focal point for years of Lovecraft-like wickedness.

Complete with a fine selection of photographs both old and new, Empire of the Wheel by Walter Bosley and Richard B. Spence will appeal to the Fortean, to the devotee of the weirder side of crime, to anyone and everyone who has been fascinated by the world of Aleister Crowley, and to all those who love a good old story that is all-parts murder, occult-driven and conspiracy-loaded!
Posted by Nick Redfern at 11:49 AM 1 comment: