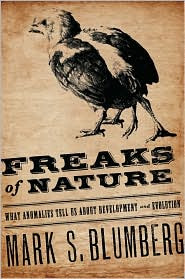 I haven't yet read this book - Freaks of Nature: What Anomalies Tell Us About Development And Evolution by Mark S. Blumberg - but it looks to be a very good one.

As the publisher tells us:

"In most respects, Abigail and Brittany Hensel are normal American twins. Born and raised in a small town, they enjoy a close relationship, though each has her own tastes and personality. But the Hensels also share a body. Their two heads sit side-by-side on a single torso, with two arms and two legs. They have not only survived, but have developed into athletic, graceful young women. And that, writes Mark S. Blumberg, opens an extraordinary window onto human development and evolution.

"In Freaks of Nature, Blumberg turns a scientist's eye on the oddities of nature, showing how a subject once relegated to the sideshow can help explain some of the deepest complexities of biology. Why, for example, does a two-headed human so resemble a two-headed minnow? What we need to understand, Blumberg argues, is that anomalies are the natural products of development, and it is through developmental mechanisms that evolution works. Freaks of Nature induces a kind of intellectual vertigo as it upends our intuitive understanding of biology. What really is an anomaly? Why is a limbless human a "freak," but a limbless reptile-a snake-a successful variation?

"What we see as deformities, Blumberg writes, are merely alternative paths for development, which challenge both the creature itself and our ability to fit it into our familiar categories. Rather than mere dead-ends, many anomalies prove surprisingly survivable--as in the case of the goat without forelimbs that learned to walk upright. Blumberg explains how such variations occur, and points to the success of the Hensel sisters and the goat as examples of the extraordinary flexibility inherent in individual development. In taking seriously a subject that has often been shunned as discomfiting and embarrassing, Mark Blumberg sheds new light on how individuals--and entire species--develop, survive, and evolve."
Posted by Nick Redfern at 5:39 PM No comments: 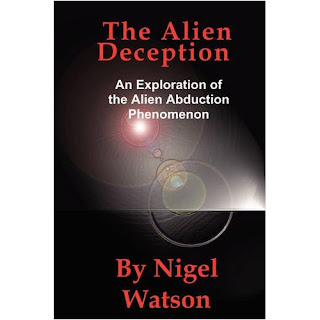 Newly published and looks very interesting, as the publisher’s blurb below reveals…

The Alien Deception: An Exploration of the Alien Abduction Phenomenon

Since the 1960s thousands of people throughout the world have reported being abducted by aliens. They report being taken in broad daylight or at night. Some say they were simply looked at by seemingly alien beings, while others say they were horribly examined.

At times, after such encounters, the abductee has little conscious recollection of
these events, and usually through nightmares, flashbacks and hypnosis they eventually learn more.

Some abductees even believe they have been used as part of a breeding project to create hybrid alien/humans. Almost all are truly bewildered by their experiences.

Ultimately, alien abductions make us consider fundamental questions about our place in the universe and our future evolution as a species.

Are abductions real events that have momentous consequences for the whole of humanity or are they the product of rumour, psychosis, hoaxes, media hype and sensationalism?

Is there a grand Alien Deception manipulating our minds and our governments or are we deceiving ourselves?

Nigel Watson’s groundbreaking exploration of alien abductions takes a comprehensive look at the reports by the earliest abductees (such as Betty and Barney Hill), right up to the latest encounters.

Watson considers the possible historical, paranormal, extraterrestrial, psychological and media influences that might help explain the origin of these reports.