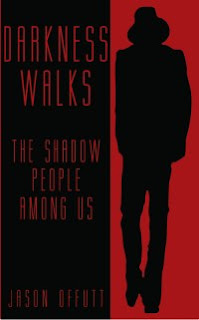 As some of you may know, over the last few weeks I have made a couple of posts (at my UFO Mystic blog) on Jason Offutt’s new book: Darkness Walks - The Shadow People Among Us. But, now, having finally digested its contents, it’s time for a review. And, fortunately, Darkness Walks is a bloody good one!
I mentioned in one of my earlier posts at UFO Mystic that - for this reader and reviewer, at least - there are definite parallels between the ominous Shadow People of Jason’s book and some of the stranger, occult/paranormal-driven Men in Black-type reports highlighted by the likes of Keel, Bender and Barker.
And, although Jason’s book is obviously not a definitive guide to the MIB, it is most definitely required-reading for anyone and everyone interested in the subject - hence why I am reviewing it right here.
So, with that said, let’s get right to the book.
With a foreword from best-selling and long-time paranormal author, Brad Steiger, Darkness Walks is a heady, ominous and roller-coaster ride into the twilight world of some of the strangest and most unsettling creatures to ever grace our planet.
They lurk in the shadows. We see fleeting glimpses of them out of the corners of our eyes. And they are a decidedly ominous, humorless, and grim bunch, to say the very least.
Sometimes, when I’m reading books like this, I get disappointed by the fact that the author spends most of his or her time relating case after case, but not actually attempting to define what might be found at the heart of the puzzle - or even what might be the root-cause of it all. Fortunately, this is not the case with Darkness Walks.
Yes, Jason most assuredly does relate numerous reports of encounters with the Shadow People; however, he also addresses the many and varied theories that have been presented to try and determine who they are and what they may want with us.
Citing reports that date back to the 1800s, Jason relates a copious amount of witness testimony concerning Shadow People encounters - much of which is pretty unsettling. Ominous presences in the bedroom, terrifying sleep-paralysis-type experiences, hooded entities provoking fear, havoc and mayhem, and even descents into madness following encounters with the Shadow People proliferate within the pages of the book.
Fortunately, Jason is not afraid to address all of the theories that may explain the presence of the Shadow People - which range from chemical-imbalances in the brain to demons, and from ET to Islamic Jinns.
Then there are the red-eyed entities (red-eyed beings are, of course, a staple part of Ufology, Cryptozoology, and Forteana in general); the disturbing “Hat Man,” who is surely a close cousin of the MIB of the 1950s; hooded monstrosities; choking-characters; and even blazing-eyed Shadow-Cats.
So what’s going on with the Shadow People? Who are they? And what the hell do they want with us?
Jason answers such questions by looking into the worlds of physics, psychiatry, metaphysics, western religion, and native American shamanism - and he does so in a very capable, thought-provoking and informative fashion.
Jason also comments on the work and theories of my good friend and Fortean hotty Marie Jones (author of PSIence, among countless other titles), the ways and means to rid yourself of the Shadow People, as well as ways to invite or invoke them - if you dare.
All in all, this is a great, informative, detailed and highly thought-provoking study of a phenomenon that straddles the realms of the paranormal, the occult and ufology with uncanny ease - if they’re not all a part of some wider phenomenon; which I most strongly suspect they actually are.
Jason has done us all a great favor by writing this book, and Dennis Stacy and Patrick Huyghe of Anomalist Books are to be applauded for publishing it.
Now, all you have to do is go out and buy Darkness Walks - TODAY, OK?!
Posted by Nick Redfern at 11:30 AM No comments: