John Michell: From Atlantis to Avalon 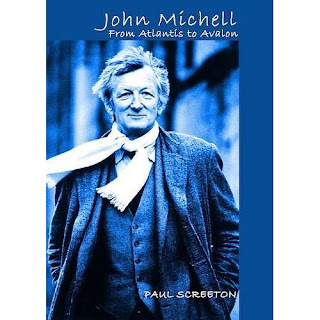 Paul Screeton has been a busy chap recently. Last week I reviewed Paul's latest title, I Fort The Lore, which is a highly entertaining anthology of his writings spanning the 1960s to the present day. But, that's not the only book Paul has written and had published in the past year.

His 2010 biography of a true character within esoteric circles, titled John Michell: From Atlantis to Avalon, is available from Alternative Albion (an imprint of Heart of Albion Press), and is - I can say for sure - definitive and required reading for anyone with an interest in (a) 20th Century Forteana (British and otherwise), (b) its history and development, and, of course, (c) one of the most significant players within the field - John Michell himself.

I read a lot of biographies and autobiographies (generally on non-Fortean individuals), and the ones I find most satisfying are those that tell the whole story - warts and all, as the old saying goes - rather than simply offering a one-sided, misty-eyed picture designed to portray or project this or that image.

Fortunately there's none of that here.

Rather, Paul provides us with an unbiased, highly in-depth, and near-unique study of Michell, focusing upon the intricacies of his character, upbringing, life, and undeniably-major influence upon British culture, folklore, mythology, and the domain of the unexplained.

Granted, we are specifically told that "this book is not a biography," but my use of the term is meant to imply that it's a definitive study of the man's life. Which it most certainly is.

Where this title differs significantly from many others that might be said to fall into the Biography category, however, is that it's not just a study of Michell and his 76-years (he passed away in 2009). It's also an examination of Michell's astonishingly huge influence on all manner of people, places and events that helped to sculpt and nurture the face of 20th Century Britain and its attendant mysteries and puzzles.

As anyone who knew John Michell, or who was acquainted with him, will tell you, he was more of a phenomenon than just a man - legendary with Fortean circles, incredibly influential, and almost near-magical and mystical in some respects. And I don't exaggerate when I make that latter observation.

Certainly, one can practically imagine a cloaked-Michell striding purposefully across England's ancient greenery early on some summer's morning, before vanishing into an ethereal fog, as the old sun begins to rise, as a Crop Circle forms nearby, and as a ghostly black dog, with blazing eyes, manifests on some old well-trodden pathway.

And, one gets the distinct and uncanny impression from reading the book that Michell seemed practically near-destined to be born at a time that would ensure he met the right people, at the right locale, and under the most profitable of all circumstances, to ensure his considerable place in the Fortean arena, and his ability to spread the word on all-things mysterious and mystical.

Things, therefore, seemed to happen around John Michell, and to those that gravitated towards him - one of who was Paul himself, who first met Michell back in 1970.

One also comes to realize (well, I did anyway) that Michell's introduction to UFOs, to ley-lines, to the world of ancient Glastonbury, and to the culture of the 1960s (whether the growing and developing music scene, drugs and their ability to influence mindset from a positive perspective, and a more open-minded attitude towards sex) seemed to have been the work of some grand designer. If you haven't yet read the book, you may disagree with me. But, read it, and your views may soon change...

And that Michell went on to pen a number of highly influential and controversial titles (check out The Flying Saucer Vision and The View Over Atlantis, if you haven't already), also serves to demonstrate that his time spent exploring and negotiating such realms - and the positive aspects of those same realms, too - was not wasted at all, and also seems to have been provoked by some unfathomable, ethereal, string-puller.

As Paul Screeton demonstrates with insight, with affection, but always with a balanced and careful mind, John Michell was a man who carved a refreshing and illuminating swathe across the British landscape, who - without any apology, and rightfully so, too - provoked radical new thoughts and paradigms, who well and truly left his mark, and who will not be forgotten by those that knew him, or those who came to appreciate his life, theories, ideas and work - which is, perhaps, all that any of us can ever hope to achieve.

If you're in the UK, you can purchase John Michell: From Atlantis to Avalon right here. In the US, click here. And to contact the publisher, go to this link.

Anyone else ever notice how much John Michell resembles the Third Doctor (Jon Pertwee)?

It would certainly help to explain his books...wouldn't it?

Nook: There's actually a section on this very angle re Dr Who in the book!