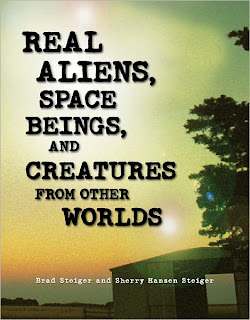 The very latest in an excellent series of titles from the husband-and-wife team of Brad Steiger and Sherry Hansen Steiger, Real Aliens, Space Beings, and Creatures from other Worlds, is yet another winner, I'm pleased to say.

Running at almost 400-pages, and packed with superb artwork (paintings, photographs and drawings), this is one of those books that is not only highly informative, but (just like all the books from our Iowa-based Dynamic Duo) it's written in an entertaining and atmospheric style that captures the imagination of the reader from page-one, and holds their attention throughout.

With that said, what about the content? Well, now we get to the really good stuff. Whether you're a Ufological veteran or a relative newcomer to the scene, Real Aliens will serve as a perfect resource tool - one from which you'll (a) learn a great deal about the nature of the UFO puzzle, (b) gain new insights and appreciations of cases old and recent, and (c) come to realize the sheer enormity and multifaceted nature of the phenomenon.

The book is split into specific sections, which I particular enjoyed, as it allows the reader to dip into whichever area they choose to first, and doing so doesn't affect one's ability to understand and appreciate the data under scrutiny either.

So, we get sections on the many and varied types of entity that have been reported over the decades, including, of course, those pesky, black-eyed dwarfs: the Grays. Detailing intriguing and, sometimes, harrowing data, as well as the possibility that the Grays may well be time-surfers, this is an excellent section that gets to the heart of the agenda of the pasty, skinny abductors from beyond.

Those long-haired hippie-like E.T.'s that came tumbling out of the deserts of California, Arizona and Nevada in the early-1950s - the Nordic Space Brothers - are also the subject of an excellent chapter that provides a very good, solid account of this particularly engaging (to me anyway) aspect of the UFO issue. Who are the Nordics? Are they friends? Messengers? Deceptive entities with devious agendas? You know what to do to get those answers: buy the book!

Our fearless authors also take another very welcome blast into the past: in search of hairy humanoids, such as those diminutive types that popped up in the early '50s, and, of course, the world's most famous hair-covered man-beast: Bigfoot. I've said it before, but that won't stop me saying it again: Bigfoot is not just weird and elusive. Rather, Bigfoot is just too damn weird and elusive! And Brad and Sherry make this amply clear in Real Aliens, by chronicling a number of significant cases that push Bigfoot into distinctly Fortean territories.

I was very pleased to see a whole chapter devoted to one of those ufological beasts that doesn't usually get the attention it deserves, and as a result, often languishes in somewhat of a degree of enigmatic obscurity: the Praying Mantis. Insect-like, slightly ominous (and almost echoing imagery of the classic 1950s movie, Them!), one gets the feeling from reading this particular chapter that these entities (whatever their origins) play a substantial, and under-appreciated role in the non-human agenda.

And there are further chapters on the other-world critters too, including the more-than-ominous Reptilians, and robotic types reminiscent of Gort from The Day the Earth Stood Still (I mean the 1951 original; not the recent remake).

Moving on from specifically the alien entities themselves: if you're into stories of underground bases, underwater installations, and cavernous abodes of a type that would have had Richard Shaver and Ray Palmer foaming at the mouth, you're in for a treat. Have beings from other realms of existence secretly established outposts on (and under) our world? Do they secretly move among us, at night, after surfacing from their darkened abodes? Might some of these creatures represent the last vestiges of a very ancient race of terrestrial - rather than extraterrestrial - origins? You'll find a great deal of food for thought on these very issues in this particular chapter.

Have you ever wondered what it might be like to have sex with a blistering hot, Barbarella-style space-babe? Go on, admit it: of course you have! After all, who could say no to Truman Bethurum's flirty and curvy Aura Rhanes?

Certainly, the most famous of all such cases - described in detail in Real Aliens - is that of a certain Antonio Villas Boas of Brazil, whose October 1957 encounter with an attractive chick of the cosmic kind, is now near-legendary. But, as the Steiger's correctly note, some such cases seem downright malevolent, and appear to demonstrate characteristics suggestive of encounters with incubus and succubi, rather than with flesh-and-blood E.T.'s. So, after reading this chapter, you might want to be very careful with respect to what you wish for...

Kind of on a similar path, the highly controversial issue of alien-human hybrids is also given the Steiger treatment. To many, this issue is all indicative of a clandestine, genetic program - and maybe one that has a disturbing agenda. Namely: to infiltrate our society with human-looking aliens. Sleepers, in other words. I was, however, pleased to see that Brad and Sherry note the deep and undeniable parallels between alien abduction, hybrids and kidnapped babies, and the centuries old stories of people who claimed to have met the fairy-folk. Are we dealing with real E.T.'s? Or is this a presently unfathomable puzzle that, depending on the culture, the people and the time-frame, manifests in a multiplicity of forms: extraterrestrials, fairies, goblins, Djinns, etc, etc? All in all, this is a very good section of Real Aliens that demonstrates one of the weirder aspects of the entire phenomenon.

Certainly, in my opinion, the most fascinating chapter is that titled Aliens: Deceivers or Deliverers? This one gets to the very crux of the saucer enigma, and demonstrates (a) the undeniable fact that just because some entity, or disembodied voice, claims to have alien origins, it may be pure folly to take it at its word, and (b) the notable crossovers and parallels between messages from alleged aliens and those communications secured via psychic means. Friendly entities from far away, or our ultimate nightmare manifesting in kindly, camouflaged form? I hope the former; however, I often suspect it's really the latter...

And, in summary, you'll also find a wealth of data in the packed pages of this book on the E.T. connection to religion (both in times-past and times-present); astronaut encounters with UFOs; an absolutely classic early Man in Black experience; connections between the Nazis, UFOs, and the occult realm; presidential knowledge of UFOs; and a great deal more.

Real Aliens is a highly enjoyable, deeply absorbing, and immensely informative title that - by covering so much wide and varied territory - makes it abundantly clear that there is a very real UFO presence in our world. And it's one that has been interacting with us for a very, very long time - and often at a deeply personal level, too. But, it's also a phenomenon that clearly has the upper-hand. Sometimes it exhibits friendliness, at other times it displays Trickster-style characteristics, and on more than a few occasions it's downright malevolent and malignant.

So, in summary with respect to Real Aliens, what can I say but: A definitive encyclopedia of the extraterrestrial variety!
Posted by Nick Redfern at 8:06 AM

Nick--Thanks for this. Gonna put this one on my "to read" list right away. I like how it gets beyond the grays and expands the concept of "alien" to new expansive levels.