A Filmography of Bigfoot 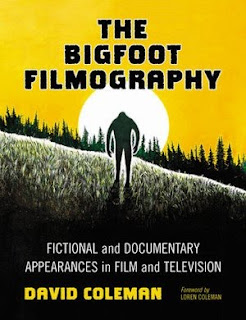 Coming in January: The Bigfoot Filmography by David Coleman.

Here's the blurb for the book, which I'm sure most Bigfoot enthusiasts will want to get their hands on:

"The 'Sasquatch' film genre, devoted to the legendary and notoriously elusive creature also known as Bigfoot, and its Himalayan counterpart, the Yeti, is the focus of this illustrated reference guide. Here is a fascinatingly detailed look at the cinematic history of Sasquatch, from the earliest trick films of Georges Melies to the most up-to-date CGI efforts. Critical insights regarding the genre's development are offered, along with an exhaustively researched filmography that includes every known film or television appearance of Sasquatch, Bigfoot and Yeti in both fictitious and documentary formats. Included are in-depth interviews with such filmmakers as Kevin Tenney, Adam Muto, Ryan Schifrin, Tim Skousen and Michael Worten, as well as reproductions of rare movie stills, posters, lobby cards and behind-the-scenes production photos. Renowned cryptozoologist Loren Coleman provides an insightful foreword to the text."
Posted by Nick Redfern at 7:20 AM No comments: 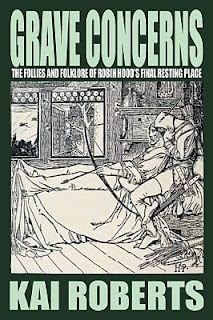 Written by Kai Roberts, its title is Grave Concerns: The Follies and Folklore of Robin Hood's Final Resting Place:

And here's the CFZ's Jon Downes to tell you about the book:

Whilst the existence of Robin Hood’s grave is scarcely a secret, appearing on the definitive map of the area and referred to in countless non-fiction sources concerned with the legend of Robin Hood, for the last fifty years it has been regarded as nothing but an annoyance by its custodians.

It lies on private land without any right of access and visitors are categorically discouraged. Whilst this situation has improved over the last decade, opportunities for anybody wishing to glimpse the burial site of this legendary hero remain few and far between. For Robin’s modern followers, it has become an immensely contentious issue.

The subject of this book is a location rather than an individual. Countless volumes have been written on the topic of Robin Hood by some of the finest scholars of medieval history and literature in Britain and this tome does not seek to rival them.

Arguments pertaining to the historical reality or otherwise of the outlaw will be discussed here only where they directly concern his grave. With regard to Robin Hood, the question for this book is not whether he is really buried at Kirklees but, for want of definitive proof either way, how that tradition became so firmly attached to the site. Hopefully, it will illustrate that Robin Hood’s grave is a site of historical interest quite irrespective of its ‘authenticity’.

For Kirklees certainly seems to attract strong beliefs, and in many cases changing perceptions of the site itself have coloured the content of those beliefs. Studying Kirklees and the various legends to have grown up around it allows us an insight into the reciprocal relationship between people and place.

Of particular interest is the extent to which the state of Robin Hood’s grave in the modern era and all the associated disputes have determined the interpretation of the paranormal phenomena witnessed in the vicinity of the site today. In this regard, it is a study in modern myth-making.
Posted by Nick Redfern at 6:33 AM 2 comments: 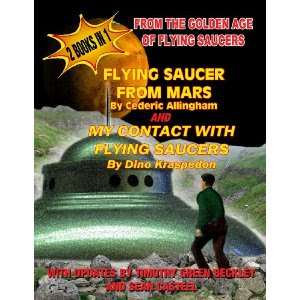 This is excellent news for fans of Contactee cases both old and massively controversial! Tim Beckley's Global Communications company has just released a new book titled From the Golden Age of Flying Saucers.

And it's title does not exaggerate! It contains reprints of two absolute classic Contactee-based titles: Flying Saucer From Mars by Cedric Allingham, and Dino Kraspedon's My Contact With Flying Saucers.

As devotees of all-things long-haired and Space-Brotherly will know, both Allingham and Kraspedon were highly intriguing characters - but for very different reasons!

And, if you're not aware of the reasons behind those controversies, well, you're in for a big treat because the book contains new Introductions to each title, that provide some highly entertaining and juicy nuggets of data on the pair!

Collectively, this is an excellent and highly entertaining blast from the Ufological past that Tim should be congratulated for bringing to a new audience. If 1950s/1960s-era Ufology, UFO contact cases, alien landings, and deep controversy are your thing, From the Golden Age of Flying Saucers is a book you won't want to miss.

Here's the link to the book, which is now available on Amazon.
Posted by Nick Redfern at 6:04 AM No comments:

Cops and the Paranormal 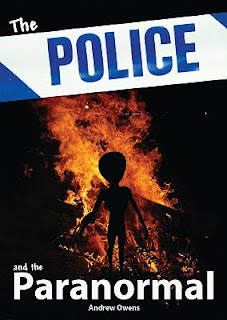 This looks to be an interesting read: The Police and the Paranormal by Andrew Owens. Put out by the Center for Fortean Zoology's Fortean Words publishing company, it contains (as you'll see from the press-release below) a number of cases in which police officers have investigated, or been witness to, cryptozoological creatures, UFOs, and much more.

As soon as I have read the book, I'll be reviewing it right here.

Here's the press-release from the CFZ's Jon Downes:

Police officers are widely regarded as amongst the most highly credible of eyewitnesses. And yet here they risk professional ridicule by revealing their otherworldly encounters with things that shouldn’t exist - but do.

* Crime Scene Investigators sift through the grisly remains of Cattle Mutilations and Spontaneous Human Combustion - and reach some startling conclusions;

* A Constable is hypnotised to recount his alien abduction;

* A Detective reports the longest-ever sighting of Nessie;

Gathered together for the first time, this unique collection of true-life encounters between the police and the paranormal is utterly compelling and highly believable, suggesting that the long arm of the law extends way beyond this world and into the next.
Posted by Nick Redfern at 6:00 AM No comments: 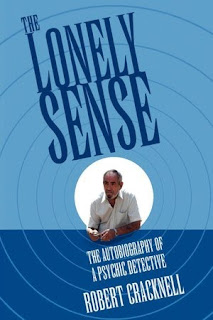 People occasionally ask me, as an author, what types of books I enjoy reading. Well, I'm a big fan of Jack Kerouac's work (aside from his poetry, which I think is a collective, appalling, rambling mess), Hunter S. Thompson's Gonzo-driven titles, and the UFO/paranormal-themed books of Gray Barker, John Keel, and my good mate, Jon Downes.

However, most of the books I read tend to be biographies and autobiographies, mainly of actors, rock-stars, and various and sundry celebrity types (particularly of the bygone, Golden-years of Hollywood).

So, when Anomalist Books' Patrick Huyghe sent me a review copy of their just-published title, Robert Cracknell's The Lonely Sense: The Autobiography of a Psychic Detective, I knew this was going to be an interesting read.


With a Foreword from a true legend in the field of paranormal-themed research and writing - Colin Wilson, no less - The Lonely Sense tells the story of one Robert Cracknell, a man with extraordinary psychic skills, and one whose powers pushed him down some strange, bizarre and supernatural pathways. They even led him to extensive liaison with officialdom on unsolved murder cases.

But, Cracknell's book is far more than just that.

It's a brutally honest, open and highly entertaining study of the author's life, that takes the reader from its very beginnings, his time spent in the British Royal Air Force, and to a profound experience that occurred during that same time spent with the military that sent him on the road to becoming a definitive psychic detective.

Not surprisingly, Cracknell reveals that coming to grips with his surfacing powers of the psychic kind was not easy. In fact, parts of his story are downright traumatic as he struggles to understand and utilize the near-unique talents at his disposal, as well as how his awakening to a new, previously-uncharted world resulted in problems close to home, with family, friends, and work colleagues.

But, as The Lonely Sense demonstrates, like so many people who came before him - and doubtless like so many who will follow in his footsteps - Cracknell ultimately found himself elevated, empowered, and ready to make use of the skills given to, or developed by, him.

In fact, one could say Cracknell's transformation and elevation eerily paralleled that of ancient Shamanic figures, who realized they were not quite like everyone else, but who used their differences to ensure positive change and results via means of a psychic, paranormal, and spiritual nature.

And it's from this moment on that we see Cracknell plunged into a whole new world, one in which he is sought out by the public, the media, and even the British Police Force, on harrowing and distressing murder cases and much more.

Again, Cracknell is open and honest about the nature of those cases, and the effects that immersing himself in them had on his mind and soul. He also provides a fascinating, behind-the-scenes account of the time he met Uri Geller, which makes for interesting reading alone.

As the book comes to a close, we read of Cracknell's retirement on Cyprus, of his studies of the Jack the Ripper saga, and of much more, too.

So, what we have with Robert Cracknell's The Lonely Sense (it runs to just over 300-pages) is not just yet another study of psychic phenomena. Rather, it is a unique account of how one man found himself in a world that he did not ask to be plunged into, but who accepted the challenge - and both the good and the bad that came with that acceptance - and did something positive with the powers at his disposal.

The Lonely Sense is, then, a must-buy for those interested in psychic phenomena, life-after-death, and the mysterious abilities of the human mind.

But, it's also required reading for anyone who wants a deep, revealing insight not just into the world of psychic phenomena, but into the swirling, turbulent and emotion-filled heart of the psychic individual, too.
Posted by Nick Redfern at 12:06 PM No comments: