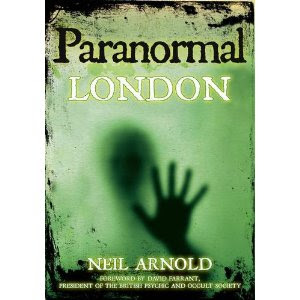 Neil Arnold's new book, Paranormal London, is an entertaining trip around Britain's swinging capital, and seeks out some of the high-strangeness that absolutely saturates this ancient and historic city. The book is very well written, in a captivating, atmospheric style that is best suited to a dark and stormy night beside an old, glowing fireplace, in a spooky old mansion on the edge of a cold, windswept moorland.

If UFOs are your thing, you'll find intriguing sections in the book on centuries-old encounters with all-things flying and saucer-shaped; and you'll learn much about London-based sightings - in the early years of the 20th Century - of so-called "Phantom Airships" and much more.

Ghosts and paranormal phenomena feature, too, with much emphasis on the notorious and ominous red-eyed and black-garbed Highgate Vampire, as well as Spring-Heeled Jack and similar anomalous assailants of a bygone era.

But, as someone with a deep interest in cryptozoology and unknown animals, I have to say that it was these sections of Paranormal London that so interested me. Neil delves deep into such controversies as the spectral Bigfoot of the London Underground; phantom black-dogs of the typically glowing-eyed variety; the many and varied out-of-place big-cats and exotic cats that call, or have called, London their home (such as the Surrey Puma, the Tiger of Edgware, the Shooters Hill Cheetah; and even spectral big-cats); very thought-provoking accounts of ghostly bears; the strange, convoluted and captivating story of the Brentford Griffin; as well as encounters with dragons and mermaids.

And, I cannot omit mentioning "King Rat," a hideous giant rodent said to haunt the winding, old sewers of London - and a true abomination, if ever there was one!

So, all in all, Neil Arnold's Paranormal London is a definitively spooky, out-of-this-world, and monstrous look at London and its many and varied attendant mysteries that I guarantee you'll greatly enjoy. Indeed, you'll never look at the old winding streets of London in quite the same way again!
Posted by Nick Redfern at 1:10 PM No comments: