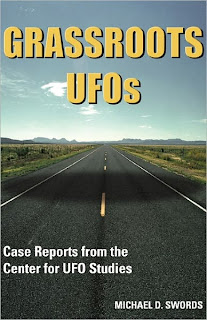 Grassroots UFOs is a brand new book that is as alternative as it is refreshing and informative. And it's one that should be in your UFO library, too. Like now.

Written and illustrated by UFO authority Michael D. Swords and published by Anomalist Books, Grassroots UFOs is, essentially, a large and varied collection of witness-testimony secured - under truly near-unique circumstances - by a man named John Timmerman.

For more than a decade, Timmerman was the brainchild behind a "traveling UFO exhibit" (for the Center for UFO Studies - CUFOS) that surfaced in shopping-malls just about here, there and everywhere across the United States. Its intention was to both inform and entertain those with an interest in UFOs.

There was a notable spin-off effect to the exhibit, however. It brought forth hundreds of people who were willing to quietly share with Timmerman the details of their very own UFO experiences and encounters.

And it's in the 250-pages of Grassroots UFOs that those cases are now revealed.

For me, Grassroots UFOs harks back to the days of such books as Dr. J. Allen Hynek's The UFO Report, Leonard Stringfield's Situation Red, and Coral Lorenzen's Flying Saucers. In other words, it's a book packed with previously-unseen witness testimony (all captured via Timmerman's trusty tape-recorder) on pretty much every aspect of Ufology, and one destined to become a fine resource tool for both present-day- and future-researchers.

Granted, some of the cases were perhaps not as deeply investigated as we might prefer, but this doesn't detract from the most important issue of all. Namely, that Timmerman collated an incredible, and previously-untapped, body of ufological data and experiences, and valiantly did so with the limited time, resources and circumstances available to him. And, with Swords at the helm, it's all there for us to digest and ponder upon.

Even though some of the case-reports might only take up half-a-page or slightly more, it's the sheer scale of encounters, and the spanning of numerous decades, that impressed me - as well as the deep similarities and trends present in certain reports, also spanning many years and varied locales.

Grassroots UFOs also highlights some tantalizing and intriguing stories that, to this reviewer anyway, are highly suggestive of much more. Take, for example, the story on page 22 of a number of people who - way back in the summer of 1945 - witnessed unusual aerial activity in the vicinity of Oquawka, Illinois. Strange basketball-sized spheres of light kept the witnesses transfixed for nearly an hour - that is, until each and every one of them "went to sleep." An early report of "alien abduction" or some altered-state interaction, perhaps?

And, there are many such reports in Grassroots UFOs that suggest the accounts told by the witnesses might actually represent only the bare-bones of what really occurred, and that perhaps there was far more to be uncovered than initially met the eye.

But, this does not distract from the significance of the data that we do have in-hand. Vehicle-interference cases; close encounters with entities of an unusual, non-human, and at times ominous, nature; radar-reports; and military whistle-blowers with tales of crashed UFOs and dead aliens, abound in the pages of this book.

Notably, Grassroots UFOs also reveals that contrary to what many people within Ufology assume, the so-called Flying Triangle-style of UFO is most assuredly not a new one. In fact, Timmerman's data reveals sightings of just such craft from the 40s and 50s.

That's one of the things that makes this book so important: by citing early FT reports and what sound very much like 1940s-era abduction stories, Grassroots UFOs challenges much of what has previously been reported within the domain of Ufology - namely that abductions began with Betty and Barney Hill in 1961, or that the FT's are simply next-generation Stealth aircraft. Of course, those are just two issues. I could cite countless more in Grassroots UFOs that push back the barriers of when the subject really began in earnest.

Equally importantly, Grassroots UFOs demonstrates the incredible extent to which the UFO phenomenon (whatever it may be or represents) has played a long, massive, and at times intensely personal, role in American society.

Timmerman, Swords, and Anomalist Books' Patrick Huyghe and Dennis Stacy are to be applauded for not just sharing the hundreds of cases that pack the pages of Grassroots UFOs, but also for demonstrating that, within Ufology, there is nothing more important than the eye-witnesses.
Posted by Nick Redfern at 11:58 AM No comments: 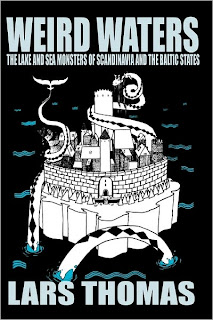 Lars Thomas' Weird Waters: The Lake and Sea Monsters of Scandinavia and the Baltic States is an excellent new book published by CFZ Press, and which I have reviewed for my most recent Lair of the Beasts column at Mania.com. Without doubt, this is a superb, regional study that deserves your attention!
Posted by Nick Redfern at 5:09 AM No comments:

Atlantis in the Amazon 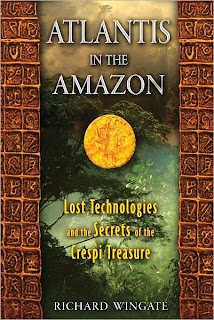 If you're one of those people who - like me - have a nagging, deep suspicion that, as a species, we have tragically lost to the fog of time an incredible and sensational body of data on cultures, civilizations and cities long, long-gone, then Atlantis in the Amazon is most certainly a book for you.

Published by Bear and Co. - who put out countless excellent titles, and whose catalog I heartily recommend - the book is part-road-trip, part-real-life adventure, part-detective story, and all-things enlightening.

Written by Richard Wingate - check out his movie Atlantis in the Bahamas - this new title presents the reader with data, facts and theories on a scenario that is as thought-provoking as it is disturbing.

The story essentially begins when we are introduced to Wingate's personal, on-site studies of the much-talked-about controversies surrounding Father Carlo Crespi - an Italian priest who moved to Ecuador in the early years of the 1920s - and his curious and captivating collection of priceless artifacts of gold and bronze.

But, there's much more to the story - at least some of those same artifacts appeared to portray evidence of ancient, fantastic technologies of a type that science and mainstream history tell us simply cannot have existed in the distant past.

But, utterly against all the odds, what if they did? And, if so, who were the makers of such astounding machines - including possibly even early, ancient aircraft (yes, you did read that right!)? How and why did they flourish only to vanish beneath the waves in the millennia-old cataclysms and catastrophes that numerous, priceless old texts tell us pummelled the Earth - and those that called it home - all those thousands of years ago?

These (and many more) are the questions that Wingate seeks to answer in Atlantis in the Amazon. Of course, numerous locales have been suggested as the origins for the tales of Atlantis and its mighty people. But, Wingate's theory is a particularly fascinating one, and he ties it in with the Father Crespi saga in a fashion that held my attention throughout.

For me, certainly, the most notable part of the book was that dealing with the Mahabharata - one of the two prime Sanskrit depictions of ancient India, the other one being the Ramayana.

Atlantis in the Amazon discusses the Mahabharata from the perspective and possibility that, in very distant times, the ancients possessed the secrets of the atom and may have tragically unleashed its terrifying power on the battlefield, thus laying to waste entire, largely-forgotten cultures and their fantastic technologies in the process.

Controversial? Certainly! But, I urge you to read Wingate's words on what sounds eerily like an incredibly old atomic skirmish - and one that may have radically altered the course of history and civilization.

Indeed, Wingate suggests that perhaps an early branch of humankind - who may have flourished in ways beyond our wildest dreams - was ultimately reduced to a struggling rabble in the wake of ancient nuclear exchanges. The result: they chose to destroy, or hide, any and all remaining evidence of the fantastic technologies that led to their disastrous downfall, and of which we - today - occasionally stumble upon enigmatic evidence and legends.

Could such a scenario be true? Are we merely the latest in possibly even a long line of civilizations that have surfaced, flourished, and ultimately reached the point of near-complete exterminaton? Are we now teetering on the brink of destruction? And if the unthinkable happens, will our world one day be viewed - tens of thousands of years from now, by the people of that era - as nothing more than the stuff of legend and folklore?

These are just some of the issues and questions that Richard Wingate's book brings to mind.

Atlantis in the Amazon is an excellent study of a forgotten, buried past that may have been as fantastically advanced as it was ultimately tragic. Let's hope we don't go the same way as those that came before us, and become merely the stuff of fairy-tales and mythology.
Posted by Nick Redfern at 8:37 AM No comments: 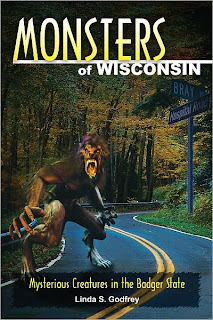 This past weekend, I reviewed Linda Godfrey's latest book - Monsters of Wisconsin - for my weekly Lair of the Beasts column at Mania.com. Here's the link to the review, which, if you want to find all the latest news on Bigfoot, werewolves, lake-monsters, flying nightmares, and even out-of-place wallabies and kangaroos, you'll definitely want to read!
Posted by Nick Redfern at 10:53 AM No comments: