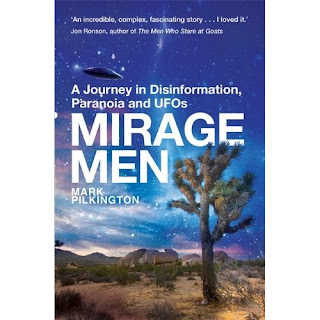 Mark Pilkington's Mirage Men is - I don't exaggerate in saying - one of the most important UFO-themed books you'll ever read. That is, if you dare to read the book, and don't shy away from it because it might upset and unbalance your carefully constructed, nice and neat Ufological world.

Those for whom Ufology is a modern-day religion, and one that offers a form of cosmic comfort, will be shocked, angered and perhaps even disillusioned by what they read. Doubtless, too, there will be a degree of hostility and outright denial on their part when faced with the crumbling of certain much-cherished belief-systems, ideas and (possibly) certain cases that have become classics within Ufology.

Too bad. Ufology, and the people in it, need a shake-up now and again and Mirage Men most assuredly delivers. And if you're someone whose notions on what make a good or bad UFO book are based on whether or not that same book says what you want to hear, then you're lost already.

As for the debunkers: well, on reading the book, they might gain a realization that the issue they confidently dismiss - namely that ET really has visited us, and has crashed and burned - isn't quite as clear-cut and black-and-white as they previously believed.

If, like me, however, you realize that something strange really is going on in our skies - but that it appears to be a blurry mix of classified military projects, official and unofficial chicanery, mind-games, lies and distortions, shadowy figures weaving complex tales, and perhaps, maybe, even a very real ET presence, then Mirage Men will well and truly satisfy.

So, with that said, what is Mirage Men all about? Well, let me tell you. Essentially, the book tells the story of Mark's (and his friend and colleague John Lundberg's) own and very personal search of the truth about the UFO puzzle, and what may be known about the subject at an official level.

After learning about how and why Mark became interested in, and intrigued by, Ufology and Forteana, we get a tutorial on the history of Ufology, and then it's road-trip time.

Things begin in an entertaining fashion as Mark and John anticipate adventures of the Ufological kind in mysterious locales, in desert settings that would have made the likes of Adamski and Van Tassel drool, and at the annual International UFO Convention at Laughlin, Nevada. But, as our Dynamic Duo delve further into the heart of the mystery, instead of becoming clearer, things get much more confusing and distinctly murky. Danger duly rears its ominous head, and a high degree of paranoia and uncertainty seem to take hold of Mark and John.

As they seek out the truth about UFOs and the US Government, military and intelligence community, the pair sinks deeper and deeper into a surreal world that seems to be part-X-Files, part-Parallax View, part-hall-of-mirrors, and ALL VERY FUCKING WEIRD. Throw in a shot of All the President's Men and more than a few Deep Throat-like characters, add a liberal dose of Cold War espionage, and mix it all up into a cocktail of truly mind-bending proportions, and Mirage Men kicks into high-gear.

We get to learn a great deal about some of the classic cases within Ufology - Roswell (of course!); the Antonio Villas Boas/Space Babe affair of 1957; the 1952 Washington, D.C. invasion; and the story of the "Underground Alien Base" at Dulce, New Mexico. Cattle-mutilations and alien abductions also surface - but not necessarily in ways that the ufological faithful might expect.

But, we get to learn much more too: namely, the way in which certain shadowy figures may have been manipulating all of the above events, cases and people (and many more too), for strange, obscure (at first glance, at least) and bizarre reasons, and how the ufological research community has been WELL AND TRULY PLAYED. Mind-control, staged-events, the spreading of spurious UFO tales to hide exotic military hardware, and even outright violation of human-rights come into play.

Of course, the highly disturbing story of Paul Bennewitz surfaces, too (a saga told in full in the pages of Greg Bishop's essential Project Beta), and demonstrates not only the extent to which some will go to protect their secrets (whether of a military, intelligence or extraterrestrial nature - or maybe all three), but how easy it is to manipulate the ufological scene and those that immerse themselves within it - and in the case of Bennewitz, with truly tragic results.

Mark also addresses the Contactee controversy - a subject for which many have no time. But, as I noted in my Contactees book, there is clear evidence that some of the Contactees may have been working with the official world, or may have been manipulated, Bennewitz-style. Mark realizes this too, and provides thought-provoking data suggesting we should look at the whole Contactee movement in a new light.

One of the many highlights of the book is that relative to the relatively recent Serpo saga, and its attendant tales, stories, rumors, allegations and supposedly secret files on crashed UFOs, alien-human exchange missions, and a great deal more. And a character that Mark and John get to meet and hang out with, and from whom they glean a great deal of data, is the somewhat enigmatic Richard Doty - a name that should be familiar to all within Ufology, but one who very few within the field have actually met.

I found this part of the book to be one of the most informative and entertaining, as it is here that the realization hits both Mark and John that what begins for them as an adventurous trip from England to some of the most mysterious and legend-filled locations in the United States, becomes something more. Indeed, it turns into a slightly sinister, paranoia-filled period where neither Mark nor John know what to believe, who to trust, or whether they are being fed a bunch of bullshit, the absolute cosmic truth, or something in between.

Mark and John find themselves slightly lost from their moorings, unsure of what is afoot, and perhaps even unable to get a full handle on whether the US Government really is sitting upon a mountain of crashed UFOs, dead aliens and cosmic conspiracies, or whether it just wishes us to think that's the case.

The fascinating thing is that for all the officially-orchestrated lies, distortions and outright manipulation of the UFO research community that they uncover, for a while Mark and John seem to find their Ufological beliefs actually growing. Is this due to the fact that they too have been firmly played by the powers-that-be? Are aliens really among us? Have UFOs really crashed to Earth? Or is the truth a swirling mix of several scenarios? Well, I'll leave it up to you to seek out the answers for yourselves.

I will, however, say this: one of the key things that stands out from reading Mirage Men is how, why and under what circumstances the UFO subject has the ability to radically transform, and manipulate even, the mindset of the individual - whether that individual is Paul Bennewitz, George Adamski, and even Mark and John.

Personally, I suspect that it is this profound potential for deep, personal change that the UFO mystery offers us that the US Government fears most. It is not so much that UFOs might exist or that aliens could be visiting us that worries the official world. Rather, it is the fact - and officialdom's realization of the fact - that the phenomenon seemingly has the ability to rewire the collective mindset of the populace, who may discard their old ways, give the finger to the old men in suits and ties that run the world, and become truly transformed.

For two men who tried to stay impartial, grounded and open-minded, even Mark and John found themselves affected and changed by not just the phenomenon, but by the people they met, the cases they investigated, the stories they were told, and the surreal pit into which they descended. And, when it comes to the issue of what those in power may know about UFOs, and the reasons behind the manipulation that Mark skilfully describes, that's an important point to remember.

In conclusion, regardless of your Ufological views, beliefs or non-beliefs, you should read Mirage Men - and very soon, too. Something is clearly going on. It certainly involves the movers-and-shakers within the intelligence world, and it is reliant upon the official weaving of complex tales of a UFO nature that seem to be part-truth, part-fiction, and part-distortion as a means to affect and mold belief-systems and more. And, it may involve a very real alien presence too.

To learn more about Mark Pilkington's Mirage Men, click here for the official website of the book, and here for the blog.

To purchase the book in the US, click on this link. If you're in the UK, here's where you can buy it. And, for Canadian readers, here you go.
Posted by Nick Redfern at 4:37 AM