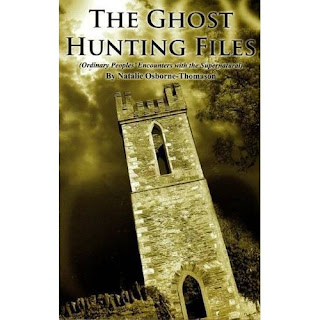 Some time ago, it was my pleasure to review Natalie Osborne-Thomason's book, Psychic Quest. Well, now she has a new book out: The Ghost Hunting Files: Ordinary Peoples' Encounters with the Supernatural.

Published in Britain by Healings of Atlantis, the book is very much a personal study of ghostly and paranormal phenomena.
And that's something I have enjoyed about Natalie's previous output: rather than take the annoying approach that some authors take (namely, extracting 100 words here and there from other people's books and then calling it "research"), Natalie's book is filled with her own experiences, tales from her own case-files and witness-reports carefully investigated by the author herself.
So, with that said, what can you expect to find within the pages of The Ghost Hunting Files? Well, the answer is: quite a lot!
The book begins with the strange story of a slightly ominous encounter of the bedroom kind that Natalie and her daughter experienced while on holiday in 2006. Then, we learn of a truly ominous experience involving a diabolical entity - half-human and half-bat - that is described as being an "Angel of Death"-style creature.
Natalie then informs us, and entertains us, with her views on the approach taken by mainstream television as it relates to the paranormal - an approach that Natalie is clearly not happy with.
It must be said that as well as being highly informative - largely due to the fact that these are Natalie's own case-files that provide us with a unique look at her work - The Ghost Hunting Files does not (as I have noted above) shy away from encounters of a very disturbing kind. The afterlife, Natalie skillfully demonstrates, is not all bright and breezy.
The grim tale of the woman left in a tragically brain-damaged state after an encounter on the stairs with a distinctly negative entity is firm evidence of that.
And the book contains much more too: tales of those floating balls of light known as Orbs; encounters with far more "benign beings" (as Natalie describes them); the strange, synchronicity-filled story of the "Deadly Injection;" reports of poltergeist activity; the high-strangeness associated with the Blisworth Arms hotel; and an uncanny account relating to the infamous Hellfire Caves of Buckinghamshire.
And the list goes on and on. All in all, The Ghost Hunting Files is an excellent book; and one best devoured late at night and with only the cold, howling wind for company.
Not only will you get to read about some fascinating accounts of the paranormal, the supernatural and the distinctly spooky; but you'll also get to see how a real-life ghost-hunter works, and what goes on behind the scenes in an investigation of the spectral kind.
Definitely recommended!
Posted by Nick Redfern at 12:06 PM No comments: