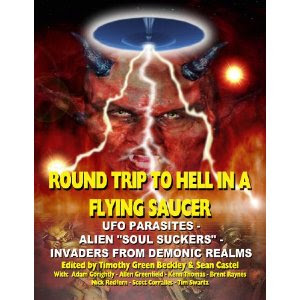 If you have read my 2010 book, Final Events, you'll know that for years, elements of the U.S. Government have secretly investigated the UFO phenomenon from the perspective that - rather than being alien in nature - it has literal demonic origins.

And, while the idea that UFOs could be anything less than extraterrestrial is most assuredly not what the vast majority of people within the realm of Ufological research want to hear, the demonic theory is one that attracts a substantial following.

And this is made abundantly clear when one reads the new book from Timothy Green Beckley, Round Trip To Hell In A Flying Saucer: UFO Parasites, Alien "Soul Suckers" - Invaders From Demonic Realms.

If you're interested in exploring further the idea that what many believe is at the heart of Ufology (namely that we are being visited by extraterrestrials from far-away star-systems), may not actually be what's going on at all, Round Trip may well be the book for you.

This is without doubt one of the biggest collections of data, case-files, interviews and more on the one facet of Ufology that - more than any other - usually gets relegated to the sidelines.

And for that reason, Tim Beckley has done us a fine service in compiling 300-pages of packed material on this issue, all under one cover.

So, what does the book tell us? Well, I'll tell you! After an Introduction from Tim B himself, in which the general theories relative to demonic UFOs are outlined, we are treated to a very-hard-to-find gem from the early-1950s: a full reproduction of Cecil Michael's book, Round Trip To Hell In A Flying Saucer (which, yes, is the same title as Tim's book, so don't get confused!).

If you have not read Michael's book, then you should. It's part horror-story, highly Contactee-themed, and infinitely weird in the extreme. Replete with strange tales of ethereal, human-like entities that manifest before Michael; out-of-body experiences; a cosmic trip in a UFO to the Planet Hell (really!); and tales of alien wisdom, this is a highly entertaining, rip-roaring read that absolutely typifies much of the early-50s Contactee movement.

We may never really know to what extent Michael's story had a basis in some form of non-human reality, if his experiences were purely internal and subjective, if he was a hoaxer and fantasist, or if - as I strongly suspect was the case with many of the Contactees - the answer might very well be found within a combination of all the above. However, the reproduction of this old tome most definitely sets the scene for the darkness that comes next.

Following on from the Cecil Michael book, we get an excellent article from Tim Beckley himself, titled UFO Possession And Mind Manipulation, which includes welcome and thought-provoking data from Brad Steiger, and additional material demonstrating some of the converging points between UFOs and matters of the occult kind.

Next up is a 9-page interview with me about my Final Events book, and the beliefs and conclusions of the Collins Elite. They are a shadowy, U.S. Government body that believes predatory, demonic entities, masquerading as aliens, are farming the Human Race as a means to secure a form of energy-based "food" from the human life-force: the soul. Even by my standards, the story of the Collins Elite is a disturbingly weird one.

Brad Steiger surfaces again (not from some dark, underground realm, I should stress!), in a first-class paper: Extreme Warning To Potential UFO Contactees. As Brad makes very clear, there is a definitively dark-side to Ufology, and to enter the scene and engage other-world entities can be physically and mentally hazardous in the extreme. You have been duly warned.

Not surprisingly, the late-and-legendary John Keel gets a significant mention in the pages of Round Trip To Hell In A Flying Saucer. As students of Ufology will know (or certainly should know!), Keel was hardly a champion of the extraterrestrial hypothesis when it came to UFOs. Instead, he drew parallels between the UFO encounter experience and the realms of the occult, the paranormal, the supernatural, and the downright devilish. And, we get to see the results of Keel's notable findings in the pages of this very book.

And Tim Beckley's work contains much, much more, too: (A) data on Satanic-themed blood-rituals and the way this may tie-in with cattle-mutilation events; (B) the theories of numerous UFO witnesses and investigators in relation to the "Demonic UFO" theory; (C) fears that those of us involved in UFO research are being manipulated and deceived by entities that masquerade as extraterrestrial, but that may actually prove to be our absolute worst nightmare; (D) occult connections to the puzzle of the menacing Men in Black; (E) shape-shifting entities; (F) the legendary, ghostly black-dogs of old England; (G) the disturbing world of Jinn (or Djinn, depending on which version you prefer); and a great deal more, too.

If you have a fascination with UFOs, but are not rigidly caught up in that one particularly-popular belief-system (namely that UFOs have extraterrestrial origins), and are looking to explore other potential points-of-origin for our mysterious visitors, Round Trip To Hell In A Flying Saucer will prove to be a welcome, vital and excellent addition to your UFO library.
Posted by Nick Redfern at 5:15 AM

It looks like a great read and the contributors are all pedigree guys. Just recently, I sought some advice from Tim Beckley and he was very decent about it. He remembers more about 40 years ago than I can recall about last month.

Is it going to be available in the UK? I checked Amazon and they only have the Kindle version.

Tim might well be the best person to ask about whether or not the printed edition will be available in the UK or not, as unfortunately I don't have info on that.