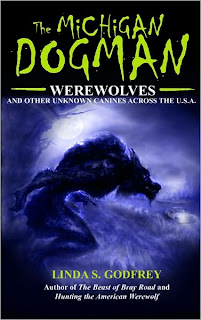 If you have followed the written output of Linda Godfrey and her work on werewolf-style entities seen in the United States, then you'll definitely want to grab a copy of her brand new book: The Michigan Dogman: Werewolves and Other Unknown Canines Across the U.S.A.

Linda has carved for herself a well-deserved reputation as the leading U.S.-based investigator, researcher and author - in a non-fiction setting - of data on such matters, as is evidenced by her previous titles, The Beast of Bray Road; Hunting the American Werewolf; and Werewolves.

And, The Michigan Dogman is a fine addition to Linda's previous titles. You might possibly wonder: what can be said about such matters that hasn't already been said in Linda's previous three books on werewolves, lycanthropy and more? Well, the answer is quite a lot!

One of the chief reasons why Dogman is such an important and captivating read is because we're treated to countless new cases, eye-witness reports, and incidents and testimony - from all across the United States, and the decades, too.

And this is a significant factor: whereas The Beast of Bray Road was very much a regional study of werewolves in one particular part of Wisconsin, Linda's new book skilfully demonstrates that, in reality, these things - whatever they may be - have been seen, and are still being seen, all across the United States. In other words, this is not a localized, regional phenomenon. Rather, there appears to be be something - or some thing - among us that has carefully avoided classification and capture for...well, who knows how long? But, it's also something that pops us just about here, there and everywhere, and appears to be somehow intimately connected with us - which I'll expand upon shortly.

The sheer range and variety of reports makes The Michigan Dogman essential reading for devotees of hairy, fanged werewolves. But, as interesting as the reports, are the notable similarities in the actions, characteristics and appearances of the creatures under scrutiny.

In other words, people from all across the United States - unconnected to, and unknown to, each other - are reporting sightings of what sound very much like the exact same creatures. Typically, they are large, hair-covered, possess muzzles and pointed ears, and have the ability to move on both two legs and four.

Indeed, the sheer number of reports that possess all of these particular aspects is astonishing. And unless hundreds of people are all banding together to hoax Linda - which I do not, for one moment, believe - then we have to address seriously the idea that there are creatures out there that look like the classic imagery of werewolves.

But, is that really what they are? Well, like all of Linda's books, she gets into some fascinating areas of research as she strives to answer that question, which some might assume is a simple one to answer, but I assure you it's most definitely not!

Linda, to her credit, does not shy away from controversy - and when it comes to the Michigan Dogman and its motley ilk, there's plenty of it! Without doubt the most important questions of all are: What are these creatures? Are they even flesh-and-blood, physical entities? Is something far stranger afoot? Are we looking at several phenomena that have been lumped together under one banner?

The curious thing about the Dogmen, as Linda carefully demonstrates, is that they seem to defy categorization. Aside from the fact that there is not - or certainly should not be - any sort of canine animal running around the United States that has the ability to walk, run and leap on two legs as effortlessly as it does on four, this is what the witnesses are reporting. And, even though such a scenario is controversial in the extreme, this still seems to place these creatures in a physical, flesh-and-blood, category - as does the fact that many witnesses have seen such beasts feeding on their prey near the sides of wood-shrouded roads late at night.

But, this is where it gets even more interesting. It's almost as if there are too many cases: it's clear from reading The Michigan Dogman that, on many occasions, the very fact that these creatures are seen goes beyond mere chance. It's almost like they want to be seen - or, perhaps, even need to be seen. Why? Well, we'll get to that soon.

In the same way that back in the 1950s so-called "aliens" were endlessly stumbled upon while they were taking "soil-samples," or how Bigfoot is so often seen crossing the road, so with the Dogmen there seems to be something stranger going on than mere, chance encounters - and we're the unwitting souls and the pawns in a bigger picture that we're not fully understanding, or perhaps not even capable of understanding, just yet.

Yes, the beasts Linda describes seem real - in the way we understand the term - but there is distinct high-strangeness attached to such reports, too, including the locations: bridges, crossroads, and so on. Of course, any student of folklore will be aware that such locations have, for centuries, been associated with sightings of fantastic beasts (such as my own personal obsession, the so-called "Man-Monkey" that haunts Bridge 39 on Britain's old Shropshire Union Canal). But, the majority of the witnesses are not students of folklore - and that's an important issue.

Plus, Linda cites a number of reports where these creatures have been seen near entrance and exit roads to highways - which is surely an upgrading of the old crossroads motif in such cases. As an aside, I'm rather reminded how, in centuries past in my home-country of England, ghostly black-dogs were seen faithfully patrolling old paths and tracks. Whereas, today, Britain's "Big Cats" are often reported seen wandering along railway tracks and on golf-courses. Indeed, as puzzling as it sounds, certain locales seem to attract exotic beasts - if they are beasts and not something weirder.

There are other locations that play a role in such cases, too: graveyards, ancient burial mounds, effigy sites and more. In fact, in reading Linda's Book, I was astonished to find how closely such reports mirror many, very similar, cases from the large Cannock Chase woods of England, near to where I grew up. Again, there appears to be a picture here, but we're seeing it through fogged eyes.

Then there are the attacks: you would imagine that if you were attacked by a six-to-seven-foot tall werewolf, you would sustain some pretty serious damage. After all, haven't we all gone to You Tube, once or twice, and searched "Bear attack" or "Lion attack" and seen the sheer damage that a large, powerful predator can inflict upon a dimwitted human being who thinks it's clever to try and shake hands with a 1,000 pound flesh-eating wild animal?

But, when it comes to the Dogmen, the attacks are always half-hearted - yes, there are a few torn shirts, and the very occasional scratch, but it's almost as if the attack is one of effect, one that is designed to provoke an emotional response in the witness, rather than to actually turn them into a tasty dinner.

So, where does Linda stand on all this? Well, to her credit, she doesn't try and force any particular theory down the throats of her readers. Rather, she astutely recognizes that while the Dogman phenomenon is very real, it's also an issue that is infinitely difficult to resolve. So, in the pages of The Michigan Dogman you will get to learn a great deal about whether or not a physical, wolf-like beast could exist, in stealth, in the U.S. and elsewhere.

You will, however, also learn a great deal about Tulpas - beasts of the mind that thrive on fear and high-states of emotion; about ancient, paranormal Guardian-like creatures - the equivalents of supernatural watch-dogs, perhaps conjured up centuries ago from who knows where, and that still roam the landscape to this very day; about skinwalkers and bearwalkers; about ley-lines and the associations these beasts have with water; and even about ancient, mighty wolves that may not be as extinct as many presume them to be.

If you're already acquainted with the work of Linda (and if you aren't, why not?), then The Michigan Dogman is a book that you'll definitely want to read. And, if you're new to the world of real-life werewolves and this book is your first taster of what it's all about, then you're in for a real treat too!

As a first-class book that offers both numerous cases of a definitively werewolf nature, as well as a variety of thought-provoking explanations to try and explain the phenomenon (or, maybe, phenomena is a better, and more accurate, term), The Michigan Dogman should have pride of place on the bookshelves of everyone interested in strange and unknown beasts, ancient legends, folklore and mythology. You'll find all that - and much more, too - inside its packed pages.
Posted by Nick Redfern at 4:43 AM