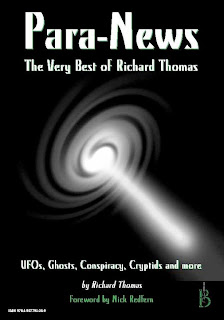 Some of you may know of Richard Thomas, who has written for Binnall of America and Stuart Miller's now-closed down Alien Worlds magazine. Well, Richard has his first book out right now, titled Para-News (for all the details, click on this link).

Richard asked me if I would write the Foreword for his book, which I was pleased to do. And although this blog essentially focuses on my reviews of new books, the Foreword (copy-pasted below) will give you a good idea of its contents, style and scope.

When Richard Thomas asked me if I would be willing to write the foreword for his very first book, saying "Yes!" was not a problem at all. Over the last few years, I have followed Richard's work at Binnall of America, and in the pages of Stuart Miller's unfortunately short-lived Alien Worlds magazine. And not only have I followed his writing: I have also seen it grow and develop in scope, depth, subject-matter, and style.

Plus, as is very clear from his written output, Richard has a great passion and enthusiasm for those puzzles, people, and places of the outer-edge variety that he pursues. All of these are (or certainly should be!) essential character traits when it comes to investigating weird phenomena, and/or interviewing Fortean experts in their respective fields.

There's nothing worse than tired, old has-beens, utterly jaded and worn by their time spent chasing the ufological, the cryptozoological, the paranormal, and the supernatural. Thankfully, Richard is none of these! What he is, is someone who is constantly striving to learn more, share his data with others, and to do the latter in an informative, entertaining and thought-provoking fashion.

So, if your interests include (A) strange and ominous beasts of a type that science says cannot, and do not exist, but that cryptozoologists say otherwise; (B) weird and enigmatic outer-space conspiracies; (C) the intricacies of time-travel; (D) spooks and spectres from the other side; (E) the way in which science-fiction and science-fact often cross paths to truly astonishing degrees; and (F) and the ominous Orwellian road that our society seems to be evermore traveling down, then this is most certainly the book for you!