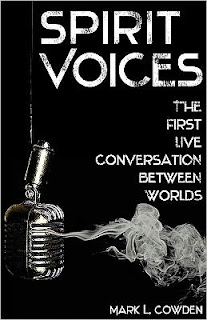 When Anomalist Books' Patrick Huyghe recently mailed me a copy of their newly-published title - Spirit Voices: The First Live Conversation Between Worlds by Mark L. Cowden - I have to confess that, at first, I viewed it with a degree of trepidation.

Not, I should stress, because I had any specific qualms about dealing with, or confronting, the subject-matter, but simply because although I read a lot of books - and write a lot of books too! - on UFOs, cryptozoology, and conspiracy-theories, I have to admit that ghosts, spiritualism, and life-after-death have never really been my thing.

But, since Patrick asked me if I would review the book, and I had said "Yes," I figured I would see what the author had to say. And I'm very glad that I did!

Spirit Voices is most certainly not your average book about chain-rattling spooks, shrieking specters and things that go bump in the night. Rather, it's a very readable, highly engaging, and thoughtful study of one man's quest (Mark himself) to seek out the truth about life-after-death, the nature and heart of the phenomenon, and its reported interactions with our plane of reality.

This is the type of subject that could have easily been turned into one of those horrible, sickly, belief-driven, self-help, "love and light"-style books written by hippie-types with names like "Eagle," "Cloud," and "Dolphin," that I totally, totally despise. Fortunately, there's none of that here - at all.

Rather, what we get is an utterly absorbing study of how Mark - an audio-visual technician from Oklahoma - found himself in Ireland, in 2010, investigating apparent contact from beyond the grave. And when I say contact, I mean precisely that: the capture and recording of apparent conversations with discarnate entities from beyond.

And what particularly stands out for me is that Spirit Voices is as much about the potential for something, some essence, maybe - call it what you will - surviving bodily death, as it is about Mark's very own, and deeply personal, quest to come to terms with the incredible data and experiences that crossed his path during the course of his adventurous trek in search of the truth.

Written in somewhat of a diary fashion (which is a good thing, I should stress), Spirit Voices expertly captures the essence of the investigation, as Mark grapples with such issues as whether or not (from the perspective of Christian teachings) it's ethical, moral or right to try and contact the dead, the profound positive implications for society and science that interaction with the spirit-world undoubtedly provokes, and the effect that exposure to such phenomena - in a conversation-style setting - can have on the individual.

And that Mark has a background in the audio-visual world is a major bonus, too, and particularly so when we see him in-the-field (or in the proverbial spooky old house or haunted castle), utilizing technologies to capture the voices of the dead, rather than simply employing the tired, well-worn tools of some old Gothic novel.

In other words, Spirit Voices - and its many attendant revelations, implications, and discoveries - offers us some hope that death is not the end. And - this being one of the most important aspects of the book - it shows that growing advances in human technology and fringe-science may actually play significant, future roles in contacting the dead, and validating that physical death may not mean literal death.

But, perhaps above all else - and I base this on Mark's very own forthright and refreshing style of writing - Spirit Voices shows the sheer extent to which people can find themselves propelled to new levels of thought, understanding and appreciation of the mysteries of this world and beyond when they address the controversial question that each and every one of us want answering: What happens to us when we die?

Whatever your views on life-after-death, Spirit Voices is an extraordinarily good, solid look at its subject-matter, written by a man who offers us an undeniably personal and near-unique look at a phenomenon that is as misunderstood as it is mysterious.

I will leave you with what I consider to be one of Mark's most important statements in his book. Of the revelations that might await us, he says the day may come when "the world's religious leaders finally accept that there does not need to be one specific explanation for our magical existence, with the copyright holder of this information being the strongest, wealthiest, most agenda-driven organization capable of reaching the most people."

WOW Nick! Sounds awesome. Thanks for the recommendation....I'm getting the book!

Hey Chase,
Yeah, you'll definitely like this one - a great book!