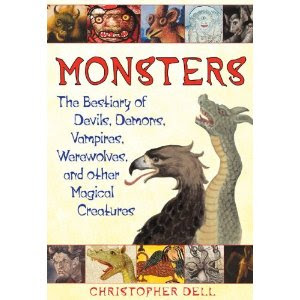 If you're into all things monstrous and cryptozoological, I cannot stress enough how much you will enjoy Christopher Dell's book, Monsters: A Bestiary of Devils, Demons, Vampires, Werewolves, and Other Magical Creatures.

Published by Inner Traditions, this is without doubt one of the best (if not the best) bestiary-style publications that has ever hit the book-shelves - and I do not exaggerate when I state that.

Running at just under 200-pages, Monsters, as you can probably guess given its bestiary nature, has its roots in creatures of times long gone, and demonstrates the sheer wealth of fantastic entities that, for centuries, have dominated our folklore, legends, mythology, nightmares and - just maybe - the real world, too.

So, with that said, onto the content: after an Introduction from the author that delves into what it is that makes us so fascinated with, and by, monsters, and that also focuses on some of the more bizarre and infamous creatures that perplexed, amazed, and even terrified such cultures as those of Egypt, Mesopotamia, Medieval Europe, Japan and more, it's onto the dastardly beasts themselves.

Kicking off with a chapter titled Gods and Monsters, Dell introduces us to the Cyclopes - the offspring of the gods Uranus and Gaia; to the Egyptian Anubis; and the Hindu god, Kali.

Creatures of Chaos follows - a section of the book that takes us back to ancient Babylonian legends, including that of the sea serpent-like Tiamat; and then it's on to far more ominous beasts, such as demons and devils, and the way in which they have played key roles in such religions as Christianity, Buddhism, and Hinduism.

Monsters of the Underworld feature heavily in the book too, demonstrating the sheer fear that existed in centuries-past of Satan's hordes - which, as the book reveals, took on a veritable multiplicity of forms, none of which look particularly pleasant. Of course, surfacing from the pits of Hell, pleasant is the absolute last way one would expect to describe these terrifying critters!

Monsters of the magical variety have their place in the pages of the book too, including those pesky little Homunculi and - of course - the Golem (both of which, coincidentally, feature in my new book, Final Events, but I digress!).

Devotees of everything dragon-like will be pleased to know that more than 20-pages are devoted to these legendary creatures. Disappointed, you most definitely will not be!

Monsters of the waters, such as sea-serpents, sirens and mermaids come under the spotlight in fine fashion, as do definitive shape-shifters, such as werewolves and the Demon Foxes of Japan.

Of particular fascination to me was the section of the book on the monsters that surface after the sun has set and invade our nightmares. Are such experiences purely internal, or does the sleep-state open a door to nightmarish realms full of all manner of beasts?

Of course, in a book such as this, folklore becomes an integral player: legends and ancient traditions are shown to be important aspects of the development of a number of significant monster-based tales. And, should you be fortunate enough or unfortunate enough (depending on your own, personal opinion!) to come face-to-face with a creature from the outer edge, you're provided with essential data on how to confront and combat them.

For me, the most engaging chapter is that titled Off the Edge of the Map, which focuses on a plethora of truly bizarre "things" (which is the best way I can describe them!) that are as jaw-dropping as they are bizarre.

There is one thing that I have left until last, and that is the very issue that defines a bestiary - and that is, of course, the huge collection of images that adorn the pages of Monsters.

I own several bestiary-type books on strange creatures, but I have to say - in all honesty - that Monster tops them all. The ancient artwork that appears throughout the book is, literally, breathtaking, and ranges from the fantastic to the ominous. Indeed, there are some renditions that positively ooze menace. Others are near-magical and evoke imagery in the mind of far-away lands and creatures of ages long-gone.

Other imagery is near-hypnotic in nature, and for those of you of a nervous disposition, you may find these same images invading your very own nightmares - thus, perhaps, giving these ancient and mighty beasts a new lease on life.

For me, it is the aforementioned chapter, Off the Edge of the Map that contains the most captivating, visual artwork, and which pulls the reader into a world very different to that of the early 21st Century - but one that, I suspect, all of us have an innate ability to connect with at a subconscious, primordial level.

I used the words "I cannot stress..." in the opening sentence of this review, but I'm going to use it again. Indeed, I cannot stress how much pleasure, enjoyment and interest you will derive from not just the text of the book, but from the accompanying artwork too, which is truly fantastic.

If you're at all interested in tales, myths, folklore and more of a monstrous and dastardly nature, then Monsters: A Bestiary of Devils, Demons, Vampires, Werewolves, and Other Magical Creatures by Christopher Dell is a book you should invest in quickly! As a definitive beastly bestiary, this is nigh-on hard to beat.
Posted by Nick Redfern at 9:26 AM