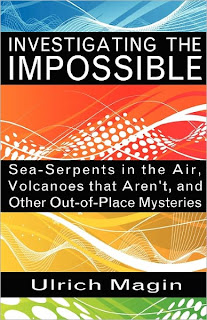 The guys at Anomalist Books - Patrick Huyghe and Dennis Stacy - have been busy lately, as is evidenced by the fact that they have unleashed upon us an excellent selection of new titles that I'll be reviewing right here, including Grassroots UFOs by Michael D. Swords and Robert Cracknell's The Lonely Sense.

But, there's yet another new title from Anomalist Books, and it's one that I finished reading over the weekend: Ulrich Magin's Investigating the Impossible: Sea-Serpents in the Air, Volcanoes that Aren't, and Other Out-of-Place Mysteries.

This is a wonderfully weird collection of articles and papers from Magin that are presented to the reader via an intriguing format. The book is basically split into four-sections, titled Air, Earth, Fire and Water.

So, in the Water section we get to read about sea-serpents and Nessie. In Fire it's the aforementioned volcanoes that aren't. In Earth it's sacred landscapes, crop circles and...well, you get the picture by now, right?

Let's start with Air, a section that devotees of all-things of a Mothman nature will definitely want to read. Did the glowing-eyed, winged beast put in an appearance at Italy's Lake Garda just a couple of years ago? Was something strange and diabolical really roaming the skies? Or was the entire affair provoked by far more down-to-earth phenomena? The answers can be found in a fine and intriguing piece of detective work!

In the same section, for fans of secret-aircraft, UFOs pre-dating the Kenneth Arnold era, rumors of advanced German technologies, and perhaps even a bit of skillful psychological-warfare, there's an excellent article titled The German Border Patrol In Their Flying Machines. And who can resist a feature on one of the more bizarre aspects of cryptozoology: winged serpents? Not me!

When it comes to Water, whatever your views on tales and traditions of sea-serpents and lake-monsters, this is a section of the book that most assuredly will not disappoint. And, indeed, it was the section that I found most engaging and thought-provoking.

Magin's approach to the controversy surrounding the Loch Ness Monster is as refreshing as it is insightful, and focuses on what we really know (which may actually not be what many think they know!) about the very earliest years of Nessie-themed research and reports.

Also of particular interest is the odd saga of the weird-looking critter of Spain's Rio Genil. This is a case - from the 1950s - with which I was not overly familiar, but that most certainly strikes a significant chord in the high-strangeness stakes. What was it that was dwelling in the waters of the Rio Genil more than half a century ago? Good question!

In Earth, Magin tackles the controversial 1678 story of the so-called "Mowing Devil" - an affair that some Crop Circle researchers conclude may offer evidence that the now-legendary formations in the fields are far older than many assume.

The Mowing Devil controversy has been addressed in a number of books; however, I'm pleased to note that Magin looks at the matter from a somewhat different - although certainly related - perspective, demonstrating that the story is far from dead and buried, and one still worthy of commentary and study.

Tales of allegedly out-of-place ships and boats (very out-of-place!) also dominate this particular section of the book, and demonstrate Magin's ability to dissect and entertain us with quirky tales from the fringes of Forteana. Legend, rumor, reality? Well, half the fun comes from reading Magin's words and conclusions, so I won't spoil things for you, except to say that this is an undeniably captivating aspect of Forteana that will not disappoint.

Finally, there's Fire and those mysterious volcanoes that aren't...or weren't...or maybe, for a while, really were! If that sounds somewhat cryptic, well it's meant to be!

You might think that volcanoes and Forteana make for strange and highly unlikely bed-fellows. Well, after reading this section of the book you will likely be forced to change your opinion.

It's clear that this is an area of research for which Magin has a great deal of time, interest and affection, and he regales us with tales of near-phantom-like volcanoes surfacing, provoking havoc, and then mysteriously vanishing into the murky depths from which they first surfaced. Or did they really surface at all? Might all the tales be simply that - tales? If so, were they just fanciful stories and hoaxes? Or did they have some basis in reality - albeit of a more down-to-earth nature?

I've never really been that interested in volcanoes, but Magin crafts a superb story (across several papers) of how they have come to play a significant and long role in folklore, mystery and Forteana.

And, with that all said, I will leave you with the following words: Ulrich Magin's Investigating the Impossible is a first-class, highly-enjoyable, and deeply informative study of a wide variety of infinitely odd phenomena that Forteans everywhere should have on their book-shelves. Charles Fort would be proud and pleased!
Posted by Nick Redfern at 9:45 AM

Ulrich Magin is one of those Fortean researchers I rate highly, so his book is definitely a must read.